The Broke Girl’s Guide to Being More Creative 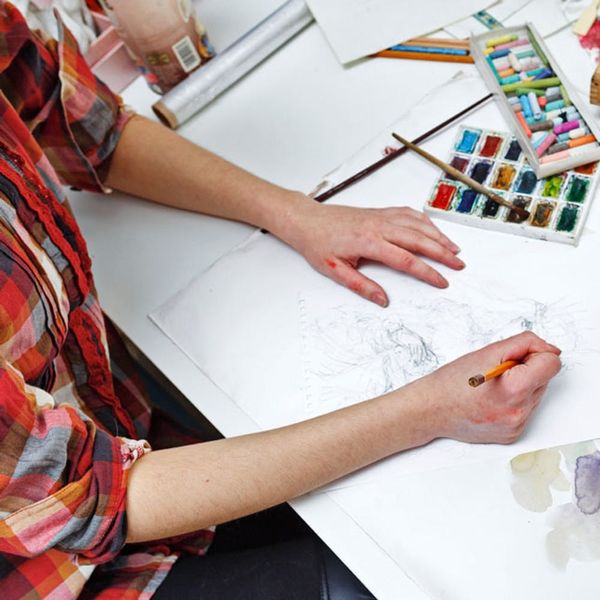 Every January, magazines splash the same aspirational headline across their covers: “New Year, New You.” But while nearly half of us make make these promises to ourselves, most of us won’t stick to our new year’s resolutions. And it feels like we’re back on the same old hamster wheel of bad habits by the time Valentine’s Day rolls around. Luckily for people who are determined to change things up this year for real and live more creative and fulfilling lives, the easiest (and sometimes most effective) ways to unleash those creative urges barely cost a thing.

Chelsea Collier, the co-founder of Wake Up, an Austin-based network of mentors and coaches, affirms that it doesn’t take anything as drastic as expensive retreats, dramatic lifestyle changes or art school enrollment to get creative this year. In fact, Chelsea says little daily and weekly practices can add up to a whole new approach to life.

1. Adopt an empowering mantra. Plenty of phenomenal quotes exist about unlocking our creativity, but Chelsea points to a particular favorite that lends itself to all forms of artistic expression — and life in general. Writer Neil Gaiman says, “I hope you’ll make mistakes. If you’re making mistakes, it means you’re out there doing something.” Or consider this one from Amy Poehler: “There’s power in looking silly and not caring that you do.” Memorize whatever words help you get over your fear of failure, one of the primary things that hold people back from taking creative risks, and repeat them often.

2. Take an infinity walk. “When you’re catching up with a friend or having a one-on-one meeting for work, take a walk instead of sitting in one place to stimulate creativity” Chelsea says. “Even better, choose a path in the shape of a figure eight, called an ‘infinity loop.’ Unlike walking from point A to point B, continually tracing a circuitous path literally changes the way you think as you walk.” What’s more, it’s an easy way to take more steps in a day and enjoy some fresh air.

3. Set aside guilt-free time to be inspired. When it comes to unlocking our creative potential, it can take a bit of warming up to really get our engines started. So, Chelsea says, it’s important to take the time to treat yourself to books, films, websites, workshops and other resources that inspire you. Some great places to start: books like Big Magic: Creative Living Beyond Fear by Elizabeth Gilbert and Steal Like an Artist: 10 Things Nobody Told You About Being Creative by Austin Kleon; inspiring documentaries about creative souls like Iris and Beauty Is Embarrassing; and thoughtfully curated websites like The Great Discontent and Brain Pickings. Anything else that piques your interest and encourages you to try new things is fair game too.

4. Stop comparing yourself to what you see online. It’s all too easy to be intimidated by what we see other people doing online. We fire up Pinterest or Instagram to look for inspiration, but end up paralyzed by our insecurities, worried that everyone else is more creative, inventive or cool than we could ever be. “That’s a lie we tell ourselves,” Chelsea says. “Creativity isn’t a competition; it’s just a way of being. Sometimes the best thing we can do for ourselves is close the laptop, leave the phone behind and go do something that doesn’t involve a screen of any kind. If there are trees, sky, dirt, sand and a body of water — even better.” And when in doubt, she says, you can always walk that infinity loop, either alone or with someone else.

5. Just do it — and stop worrying. “We’re all our own worst critics,” Chelsea says, “But we don’t have to be.” That’s why Wake Up, for its part, encourages people to express themselves, ignite their spirits and enrich their minds. “When we create something, it doesn’t have to be about making masterpieces; it can just be about expressing ourselves and using parts of our brains that aren’t necessarily stimulated on a day-to-day basis,” she says. “Giving ourselves permission to play is a really powerful thing. When we allow ourselves the opportunity to try new things and be in the moment without worrying about the outcome, good things happen.”

(Photos via Wake Up and Getty)

Amy Lynch
Amy is a freelance writer and editor, telling the stories of progressive people and projects that move the world forward. Her work has appeared on The Hairpin, Refinery29, Citygram and more, and she's developed content for the likes of Alternative Apparel, Milkshake and Silvercar. She lives, works and plays with her fiancé and their dog, Bogey, in the weird, wild heart of Austin, Texas.
Home News
More From Home News