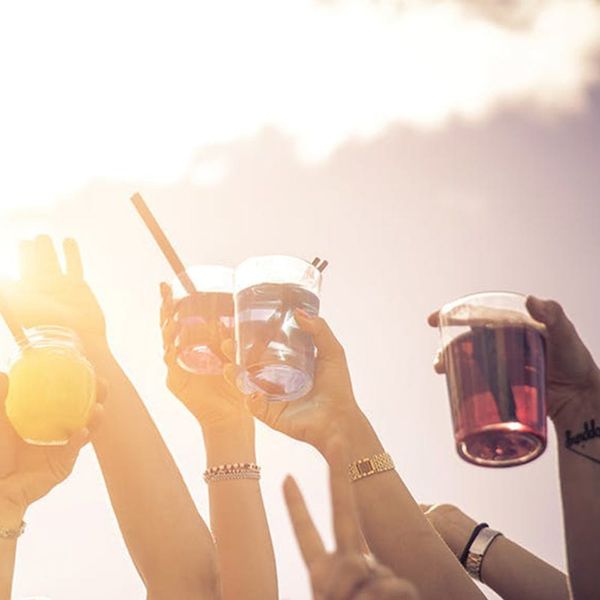 As amateur mixologists we’re always on the hunt for new spirits, but lately we’ve been trying to learn more about a classic and how to choose the right one to make tasty drinks at home. Rum and whiskey get tons of attention on the cocktail scene, and wine inspires passion in people all around the world. Vodka, meanwhile, usually conjures up stories of college parties that end with, “And that’s why I don’t drink vodka.” Yet it seems like a mistake to write off an entire class of spirit due to one bad experience (or two). To find out how to sip a quality vodka, what the deal is with all of those flavored versions, and the perfect Blueberry Ginger Mule recipe, read on.

What is vodka, exactly?

People spend countless hours delving into the process of wine making, yet most know very little about vodka’s origins. Some of the confusion can come from the fact that vodka is fairly inoffensive, and it’s not made from any one type of fruit or vegetable. “Vodka is, by definition, an un-aged, neutral spirit that can be distilled from virtually anything including corn, wheat, grapes, and potatoes,” Laurie Harvey, beverage director of Cherry Pie Hospitality in Houston, Texas, explains. After the product in question has been fermented and distilled, it’s filtered. “Filtration of vodka helps create its purity,” shares Tommy J. Lansaw, beverage director at Wood in Chicago, Illinois. “Both the ingredients and the filtration methods are key components in creating vodka.”

how to use it properly

To reacquaint yourself with the spirit, think small. “If someone is unsure if they like vodka, I’d say start with a cocktail,” says Lansaw. “The other components in the drink will help mask the intensity of the vodka. For example, with a vodka gimlet you would be able to taste fresh lime and some sweetness but still acquire some flavors that the vodka offers as well.”

It’s also important to make sure your drink is balanced. It’s tempting to pour with a heavy hand, but too much of any spirit will make a cocktail that will make you cough and splutter. When starting out, it can be useful to use a recipe and measure out each ingredient. With simple drinks, like gimlets and martinis, quality matters. “I always recommend a vodka that has been filtered several times, such as Crystal Head Vodka,” Lansaw says. You can be less discriminating about what you purchase when it comes to cocktails with more ingredients, especially punches made with fruit juice. But do know that the really cheap stuff still won’t taste great.

In general, both Lansaw and Harvey recommend corn-based vodkas, like Deep Eddy, Tito’s, and Prairie Vodka, for both their mixability in cocktails and their ability to be sipped neat. To find out what a vodka is made of, check the label as it’s required by law to appear there.

Why It’s Important to research

It takes a long time to learn about wine, and the same can be said for vodka. You have to taste around to start discovering what you like, whether that means finding a region that produces vodka that’s up to your standards, a certain type of filter process that tickles your fancy, or a specific ingredient that’s turned into a vodka you love. “Maybe you won’t like a winter wheat that was flavored artificially, but you would like a properly crafted corn vodka,” muses Harvey.

Flavored vodkas can be fun, but not all are created equal. “Birthday cake-flavored vodkas are very unlikely to be made from real birthday cakes, but you are getting real cranberry juice from a family farm in New England with something like Deep Eddy Cranberry,” Harvey explains. Lansaw also recommends flavored vodkas that are made with natural, rather than artificial essences, noting, “They represent the flavor as they should but still hold the vodka’s true identity.”

At the end of the day, learning more about vodka doesn’t need to be daunting. All it takes is some curiosity. “The good news is that there is quality vodka at nearly every price point,” Lansaw says. “My advice is to do some research. Whether it means going online and reading reviews or going to your local bar and asking for a few tastings! Most bartenders enjoy educating their guests on spirits. Don’t be shy to ask.”

Still not sure where to start? Try this blueberry ginger mule recipe, shared with us by Deep Eddy.

1. Make the blueberry cordial. Combine all ingredients in saucepan over medium heat until sugar is dissolved and blueberries burst. Cool and strain. Leftover blueberry cordial can be kept in an airtight container in the fridge for up to a week.

(Photos via oneinchpunch and ShotShare / Getty Images and Deep Eddy)

Justina Huddleston
Justina Huddleston is a food writer living in Los Angeles. When she's not busy writing, she spends her time in the kitchen creating both virtuous and decidedly junky vegan food. Buffalo chickpea pizza, anyone? She's also been known to eat a plain block of tofu or beans straight out of the can for lunch, but somehow those culinary adventures don't make it to her Instagram. You can follow Justina on Twitter or see what's cooking in her kitchen on her blog, A Life of Little Pleasures.
Drink
Cocktails
Drink
The Conversation
More From Cocktails