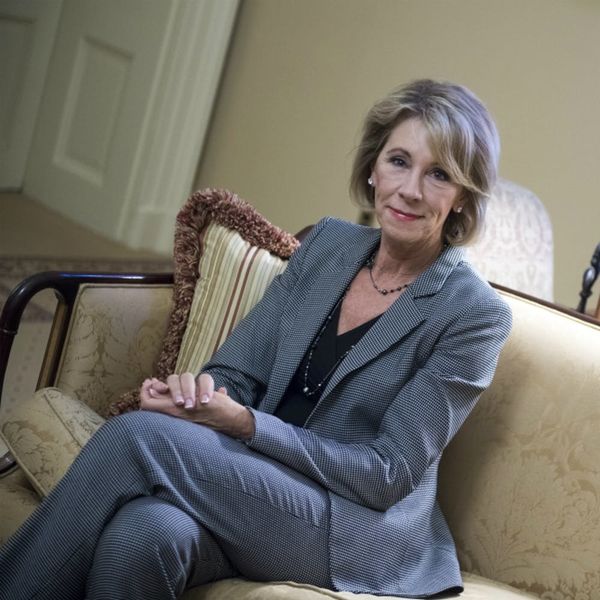 Despite a few Democrats trying their hardest, and thanks to Mike Pence’s tie-breaking vote, Betsy DeVos has been officially confirmed as education secretary. While some seem to be applauding the choice, others (especially parents of school-aged children and people with student debt) are concerned they’ll be negatively affected in a very major way.

With the Senate vote happening midday, you would think that it would take some time for protesters to mobilize. But, thanks to modern technology, people are getting in on the action. Facebook played a major role in the #NoDAPL protests that started in the fall, and now it’s connecting people who are protesting DeVos’ confirmation.

Within one hour of the announcement of her confirmation, students in NYC have taken to the streets and walked out of their classes in protest. As DeVos is someone who has never held office or even gone to public school, protesters are worried that she will gut the public school system and, specifically, that her “voucher program” will widen the already huge gap in education between the country’s richest and poorest students.

With people out on the streets protesting, we can only share the good advice that many are giving out today: If the confirmation of Betsy DeVos is troubling to you, engage in your school council, get involved in your kid’s education and continue to educate yourself on issues that matter to you.

Have you ever taken part in a walk-out or protest? Tell us about it @BritandCo!

Kat Armstrong
Kat has been a writer, social media maven and mom for longer than she's willing to admit. She's also spent time in front of and behind the camera, interviewing celebs, politicians and acting as a producer for fashion and artistic photography shoots. When she isn't writing for various orgs and publications, she's hanging with her kids, husband and French Bulldog, Peter, in Toronto, Canada.
Education
Politics
Education Politics
More From Politics