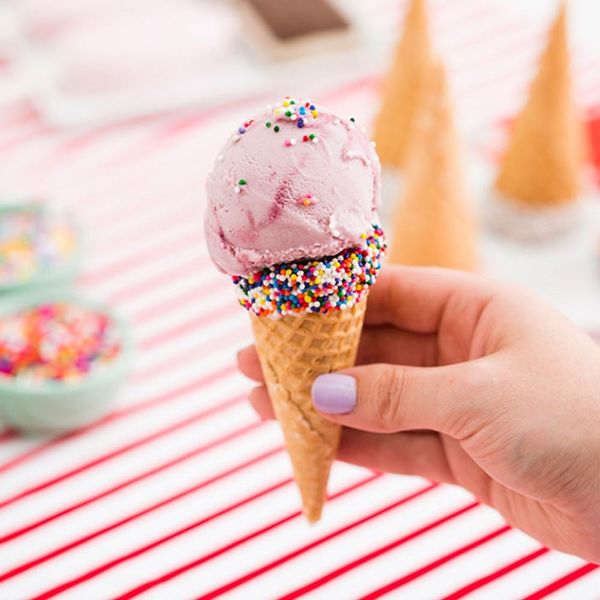 We’re nearing the end of summer, and while that may mean it’s time to say TTYL to bathing suits and pool parties, it doesn’t mean you gotta throw up those deuces to ice cream indulgences anytime soon. But even though it’s totally cool (cool for the winter?) to treat yourself to the frozen desserts throughout the seasons that aren’t summer, ice cream will still typically mess with you and melt from the cone and down your hand even if temps outside aren’t 85+ degrees.

A team of scientists based at Scotland’s University of Edinburgh recently shared their discovery and testing of a naturally occurring protein that is melt-resistant. NO MORE STICKY FINGERS, YOU GUYS!

That protein is called BslA, and it adheres to fat droplets and air bubbles, which makes them more stable in a mixture like ice cream. By binding air, fat and water in ice cream, the resulting dessert is super smooth and heat resistant (and just as tasty), meaning you can actually sit by the pool or jacuzzi and enjoy that double scoop at a glacial pace if you want.

The protein also has other benefits besides preventing instantly dripping ice cream cones. Because the moisture is locked in, those ice crystals that tend to form when you’ve got a pint or two shoved in the back of your freezer for a while would not happen any longer. Better yet, ice cream could be produced with lower saturated fat levels — and calories — meaning the guilty pleasure wouldn’t result in as much guilt in the future. Unless you finish that half-gallon, of course ;)

Now for the bad news. Ice cream with this frozen treat-altering protein won’t hit shelves and ice cream-serving locales for another three to five years. So until then, make sure you’ve got napkins and hand sanitizer at the ready.

What are your thoughts about non-melting ice cream? Share them with us in the comments.