What You Need to Know About the Recent Immigrant Raids 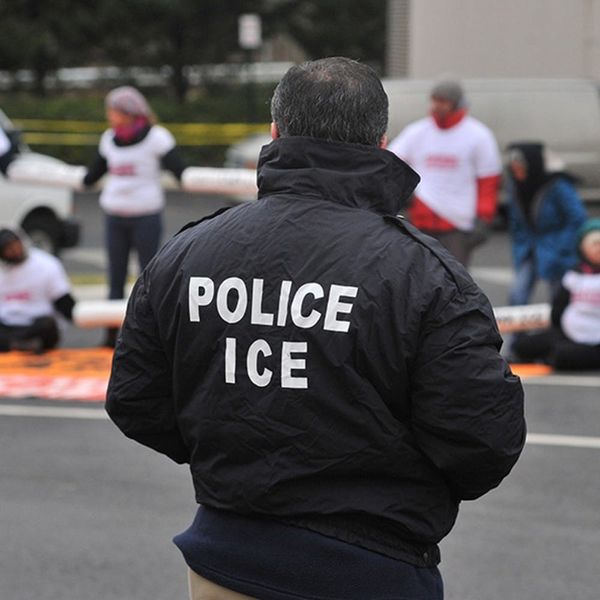 It appears as though President Trump isn’t letting the temporary halt of his travel ban deter his crackdown on immigration. Shortly after the 9th Circuit Court unanimously refused the White House’s appeal to reinstate the ban, news of ICE (Immigrant and Customs Enforcement) raids spread across the country. Arrests were reported in Atlanta, Chicago, New York, the Los Angeles area, North Carolina and South Carolina. Are the two related? Are all undocumented immigrants now in danger? Here’s everything you need to know.

Over the weekend, ICE arrested approximately 600 people across the US. The large number has caused panic among immigrants, as it’s been unclear whether these raids were part of an ongoing operation geared specifically toward undocumented immigrants with criminal convictions or an increase in deportations sparked by orders from the Trump administration. Or could this be a perfect marriage of the two?

Yesterday, President Trump took to Twitter to attempt to clear things up. He wrote, “The crackdown on illegal criminals is merely the keeping of my campaign promise. Gang members, drug dealers & others are being removed!” But is he taking credit for an action that was already underway?

Gillian Christensen, the acting press secretary for the Department of Homeland Security, didn’t necessarily attribute the increase in arrests to orders from the new president. She told reporters, “The focus of these targeted enforcement operations is consistent with the routine, targeted arrests carried out by ICE’s Fugitive Operations Teams on a daily basis.”

According to DHS, these were not random raids. The organization says all the immigrants arrested have criminal convictions. But there is some concern as to whether those convictions actually warrant something as extreme as deportation. CNN recently shared the story of Guadalupe Garcia de Rayos, a woman who’s been in the US for 20 years. She has a husband and kids here. In 2008, she was convicted of a felony for using a fake social security number. After her case went to immigration court, it was determined that she could stay but needed to check in with immigration authorities annually. For the past seven years, she’d simply check in with them and be released. But on Wednesday she was detained and deported back to Mexico.

Actually, yes. President Obama was quite strict on deportation measures and was even given the nickname “Deporter in Chief” by his critics. During his eight years in office, two and a half million people were deported. In 2012, Obama hit an annual record by deporting more than 400,000 people. According to data from DHS, the Obama administration has deported more people than any other president’s administration in history.

President George W. Bush was also heavy on deportation. Over the course of his eight years in office, he deported just over two million immigrants. Trump has promised to deport upwards of three million undocumented immigrants, but raids like the ICE conducted over the past week aren’t exactly a new thing.

WHAT’S GOING TO HAPPEN TO THESE IMMIGRANTS?

Contrary to popular belief, every person on US soil has constitutional rights — regardless of whether they are here “illegally” or not. That essentially means they must be given notice and an opportunity to be heard in immigration court before being deported. The ACLU, who has been a major player in fighting President Trump’s immigration crackdowns, recently shared a graphic illustrating what you can do if an ICE agent shows up at your house.

KNOW YOUR RIGHTS: What to do if ICE agents show up at your door. #NoBanNoWallNoRaids pic.twitter.com/HOAF5qtYAs

Under their guidelines, agents must provide a warrant issued by a judge to legally enter a home. If you are arrested, you have the right to remain silent and to request a lawyer and a hearing before an immigration judge. Immigrants are also highly encouraged NOT to sign anything without representation as they could signing away their right to an immigration advocate.

IS THIS THE NEW NORMAL?

Honestly, TBD. With President Trump’s aggressive immigration plans, arrests like this might not be uncommon. However, according to ICE, the DHS and Trump’s administration, specifically violent and criminal immigrants are supposedly being targeted here. Officers shouldn’t be asking for documentation at random. But again, the severity of those criminal offenses is being questioned.

Additionally, there is a growing concern about the manner in which ICE officers will handle these deportation initiatives. A recent piece by CNN reports, “Homeland Security Director John Kelly testified before Congress last week for the first time. In doing so, he noted that morale among ICE officers was down under the Obama administration, because they felt like their hands were tied. He further suggested that morale would be boosted under the new President.” The fear here stems from Kelly’s implication that Trump’s approach to deportation will be more aggressive than past administrations, even if the past two presidents have also been strict on deportations.