This Jacket Changes Color Based on What You Touch 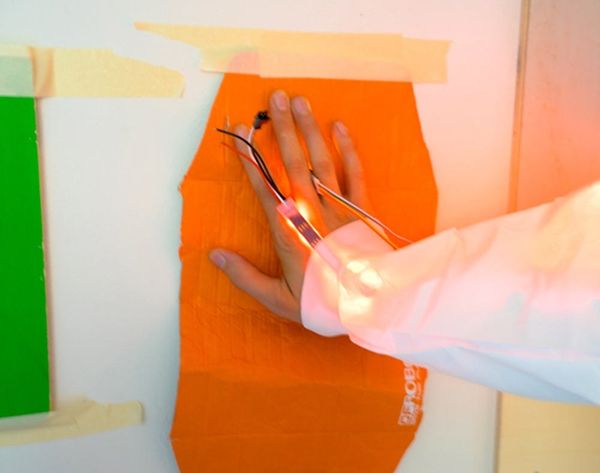 Rather than trying to rob Joseph of his technicolor dreamcoat, Norwegian design studio Drap og Design created their own amazing version called the Interacket — a light-up jacket that responds when the wearer touches something. Touch something blue, and the jacket’s LED lights slowly turn blue. Touch something red and the lights change to red. BUT HOW?

Interacket’s outer layer is a regular painter’s suit, but the inner layer is made from reflective foil like they have in emergency heating blankets (it’ll certainly keep you warm). The sleeves are lined with LED lights in red, green and blue, and they answer to a couple of Arduino chips and a color sensor from Adafruit, changing shades and lighting up in different colors depending on the surroundings. So if you touch a red fire hydrant, it’ll change to red. And if you touch a green wall, it’ll change to green.

The original concept for Interacket began with a study of how animals interact with their surroundings and are perceived by their surroundings. Drap og Design’s Sven Håkon Voldum writes to Co.Design, “In the beginning we looked at animals as different as bats, squid and platypus and researched how to mimic their unique qualities using electronics and wearables.” In the end, the chameleon won their attention. Eventually the Interacket grew out of that project as a completely different sort of design, but the designers would like to create a line of animal-inspired wearables in the future.

Would you wear this party trick of a jacket? Let us know in the comments!

Annie D'Souza
Annie is the founding father and editor-in-chief of The Midwestival and a long-time jean-on-jean enthusiast.
Design
Tech
Design