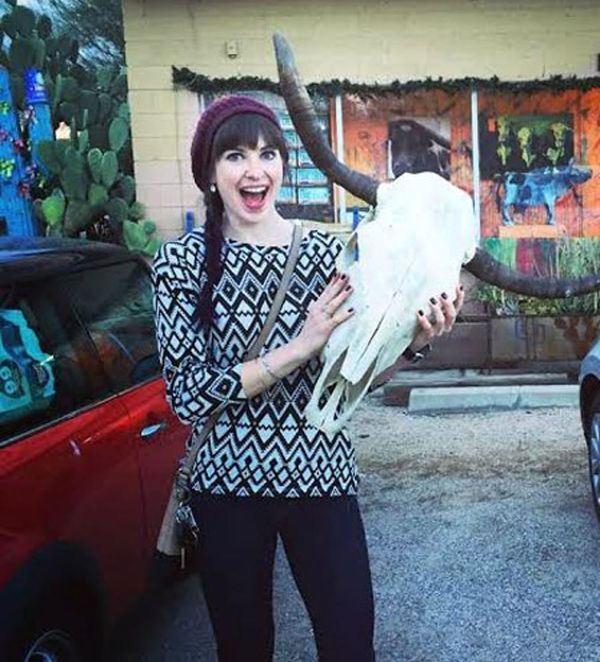 Whether it’s creating a Mad Hatter-style tea party from scratch or a set that looks straight out of the Wild West, Ellen Jaworski gets to make magic for a living. She’s worked as the Assistant Art Director for The Voice, Art Department Manager for The X Factor and as an art director on countless other television shows. She loves the fast-paced energy of live television and getting involved in all aspects of production. On any given shoot, she might be sourcing, shopping for materials, installing a set or helping the production designer execute their vision for the show.

Recently, Ellen worked on two DirecTV shows that were based in Phoenix, Arizona. “It was a blast! One was a wild west saloon and the other was a Victorian-themed hotel lobby. My job was to find props and set dressings that represented the spaces that we were trying to make these studios look like,” Ellen tells us.

“I found myself at second-hand furniture stores, thrift stores, cowboy-themed kitschy shops and Native American artisan shops. One of my favorite stores was called the Town Dump. It was the most incredible collection of oddities, from animal skulls to unicorn statues. A lot of the fun with those kinds of jobs is going out and exploring — there’s no telling what you’re going to find.” In an average year, Ellen works on at least 20 live television shows, traveling from Los Angeles to Miami, New York, Phoenix or wherever a set needs her.

How Ellen Became an Art Director

Ellen has been working in live television since 2011. She got her start interning for art departments on television shows while attending Emerson College in Boston. For her last semester, she interned in Los Angeles. While working on her last gig before she graduated, she cold-called a list of art directors, telling them about her background and why she was qualified to work on their show. Her brassiness paid off and she landed her first major television show.

As a 26-year-old art department manager for The X Factor, Ellen is young to have such a creative position on set. It’s also worth nothing that female art directors are uncommon in the television industry, which is a male-dominated field. Ellen’s quick rise is a testament to her work ethic, resourcefulness and ability to remain calm, under even the most chaotic circumstances.

When describing working on The Voice, Ellen says. “For us, on the weekly episodes, we have a five-day turnaround from getting the creative treatment for the show and making it a reality onstage. It becomes a crazy, hectic free for all. There’s shopping to do [and] scenery to draw, design and build. Then there are potential design changes due to logistics, and we have to get those notes, get those done and get the sets up and ready for rehearsal. And then we have to take it all down and start over the next week.”

Helping run an art department on such a large scale is a huge undertaking, and when working on massive productions, it takes everyone on her team to make sure that the projects are executed perfectly. While working on the X Factor, she helped build the elaborate set for Fifth Harmony’s rendition of “Anything Can Happen” by Ellie Goulding.

“We created this totally whimsical set with carousal horses, a gazebo and floating numbers in the air. And there were balloons that needed to be handed out to the audience,” Ellen remembers. “It’s 20 minutes before Fifth Harmony is supposed to go onstage, and one of the art directors turns to me and asks, ‘Did we coordinate who is going to hand out those balloons to the audience?’ And I just remember my heart freezing, because I knew that was something that had not been worked out. So I say, ‘Oh my God, no.’ And I’ve never seen five people (her crew) move so fast.”

“It was all-hands-on-deck. Everyone in the art department trailer ran out to get production assistants to help us hand these out, and we were hauling out garbage bags filled with balloons to hand out to several hundred people. And as soon as the commercial break happens, we’re handing them out to everyone, to get them out on time so that they will be a part of this show that’s going to go live in the next three minutes. We were up against the clock and we made it happen. It was a wild experience,” Ellen says, laughing.

By wrangling all of the crazy elements of a production together and getting it ready for showtime, Ellen is the ultimate ringleader. She is looking forward to working on this season of The Voice, and the long line of shows ahead of her — and we’re looking forward to seeing what she does next.

Got a job you’re curious about? Obsessed with The Voice? Tweet at us @britandco and let us know!

Michelle Threadgould
Michelle Threadgould is a journalist who lives in Oakland, California, and covers the intersection between arts and culture and social justice. She has written for the New York Observer, Oakland Magazine and SF Weekly. She is working on a novel about growing up punk and what happens when your idols fall.
#iamcreative
Brit + Co Planners + DIY Kits
#iamcreative
More From Brit + Co Planners + DIY Kits