The Jonas Brothers Reunion Is Officially On! Watch a Teaser for Their New Song 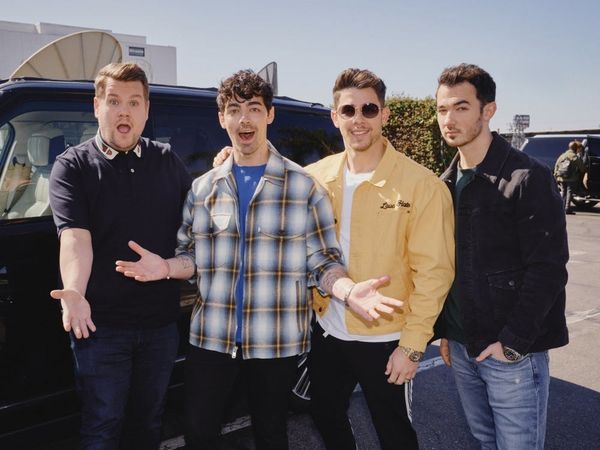 The Jonas Brothers are officially back! Five years after disbanding their musical group, the real-life brothers have announced a new single, “Sucker,” and a week-long takeover of The Late Late Show With James Corden.

In a Late Late Show clip released online on Thursday, February 28, host James Corden drives around picking up the JoBros one by one: first Joe, then Nick, and finally Kevin.

“Is what I think is happening, is it happening?!” Corden asks excitedly.

“Yup, we’re back!” the brothers say in unison as they launch into a Carpool Karaoke version of their 2008 hit “Burnin’ Up.”

“It’s nice to be able to finally tell somebody,” Nick says. “We’ve kept this a secret now for about seven or eight months.”

The secret wasn’t exactly a well-kept one: A year ago, the Jonas Brothers sparked reunion rumors when they reactivated their long-dormant Instagram account, which hadn’t been used since July 2013, three months before they officially announced their split.

Still, this is the first official confirmation we’ve gotten from the brothers, and they’re all relieved to have the news out in the open. “I’ve gotta dust off the cobwebs, here we go,” Kevin quips in the teaser. The brothers then debut a snippet of a brand-new song called “Sucker,” which they plan to release at midnight on Friday, March 1.

On Monday, March 4, the group will also begin a week-long takeover of The Late Late Show With James Corden, where they plan to talk more about their reunion plans, suit up for some sketches with the host, do a full Carpool Karaoke segment, and, yes, perform “Sucker” for the first time on TV.

In the meantime, check out the teaser above.

Are you excited that the Jonas Brothers are reuniting? Let us know @BritandCo!