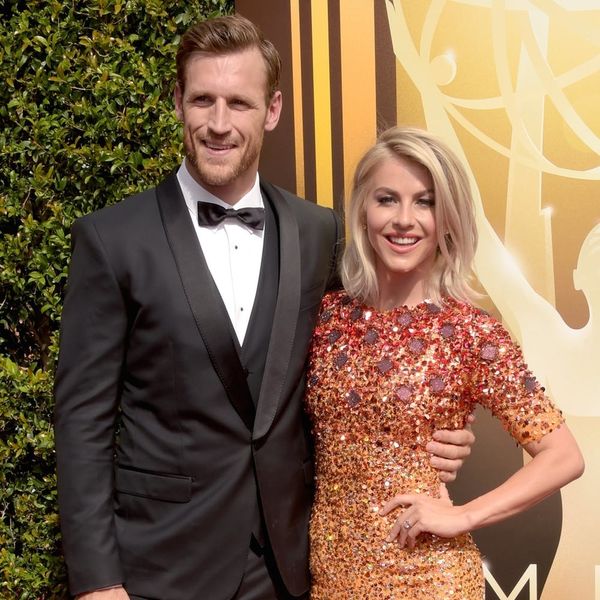 Julianne Hough certainly had reason to dance this weekend — the Dancing With the Stars pro-turned-judge officially became Mrs. Laich after saying “I do!” to Canadian NHL player Brooks Laich!

The couple, who met through a mutual friend and got engaged in 2015, chose to keep things intimate with an outdoor ceremony that took place in front of 200 family and friends in Coeur d’Alene, Idaho, reports People. Event planner Troy Williams was in charge of the festivities, which included a welcome dinner at the Blackwell Boutique Hotel on Thursday and a fun day enjoying the lake at the Coeur d’Alene Resort on Friday, before the big event on Saturday.

Congratulations @juliannehough & @brookslaich the pure happiness on your faces is priceless!! Wishing you a lifetime full of happiness!! 💙💙 pic.twitter.com/LNRY2v7nqx

As she walked down the aisle, Hough stunned in a strapless Marchesa dress that was equal parts traditional and chic with its sweetheart neckline, while Lorraine Schwartz had her covered on the jewel front.

Guests took in their sweet nuptials while sitting on pews made of wood, “surrounded by roses and tulips with flower boxes filled with billowing blooms, wild grasses and seasonal foliage,” which came courtesy of Wild Bloom. “It was really important to me that we had our ceremony outdoors,”the groom told People. “Julianne and I are very adventurous and free and wanted the setting to be in nature.”

The guest list included Hough’s brother (and groomsman!) Derek Hough, her DWTS pro costar Mark Ballas, BFF Nina Dobrev (who gushed that she had “never seen a man look at a woman like that when they said ‘I Do.’ It took my breath away.”), actor Aaron Paul, and the couple’s King Charles Cavalier Spaniels, Lexi and Harley, who actually carried the rings. (How cute is that?!)

Sunday lunch with my ❤️ #luckygirl

When it came time for the reception, guests enjoyed cocktails, dinner, and fireworks, with DJ Derek Monteiro providing the soundtrack for the night. As for the menu, Le Catering delivered smoked Columbia River steelhead with Washington apple slaw, chili aioli and ginger glaze charcoal braised shortribs, and strawberry-rhubarb crisp with whipped sour cream. Okay, we’re officially trying not to drool!

For Hough, it was the dream come true she never dared to imagine. “I don’t think I ever really necessarily dreamed about my wedding as a kid. But I know I will always cherish it and remember it for the rest of my life.”