Kaia Gerber Has a *New* Lookalike in This ’60s Fashion Icon 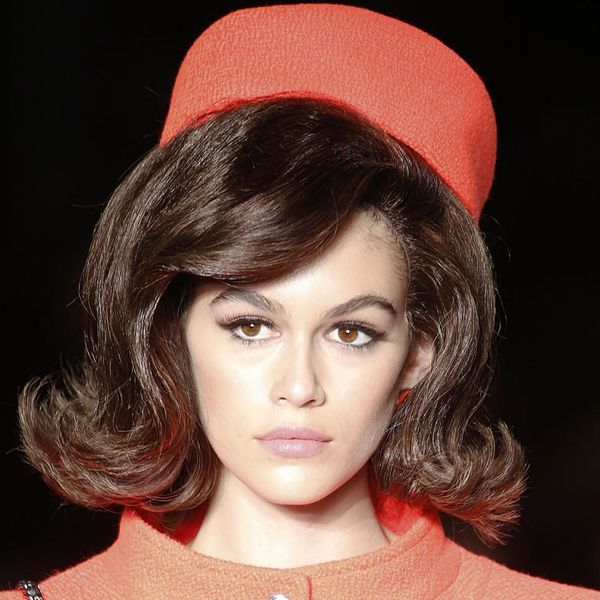 Kaia Gerber may be a dead ringer for model mom, Cindy Crawford, but it was another fashion icon that guests at Moschino’s Milan fall/winter 2018/19 fashion show were seeing when the 16-year-old runway Wednesday night.

With her flipped out ‘60s bouffant ‘do, fitted two-piece suit, and pill box cap, Gerber had us flashing back to one Miss Jacqueline Kennedy circa her ‘60s fashion heyday.

The resemblance was no small coincidence: The show, as helmed by the brand’s creative director, Jeremy Scott (who looked to the future with insane moon boots for his own eponymous NYFW showing), was inspired by the late fashionista — albeit with a twist.

As Scott explained to WWD, he was inspired by existing conspiracy theories which state that Marilyn Monroe and JFK were killed by the government to prevent Monroe from disclosing classified government information Kennedy shared with her: namely that aliens exist. “I take it one step further and ask, ‘Was Jacquie an alien? Was she an android?” Scott told the outlet. “How did she endure the pain and the grieving of the assassination? All the ridicule about her being such a haute… Bauvier too good to be an American icon? How did she endure it if she was actually a human?”

The result? A reimagined Kennedy with a mod pop vibe, the role of which Gerber played to a tee.

Also harkening back to the bygone era were sisters Gigi and Bella Hadid, who alternated between android Jackies and bombshell Marilyn types, who came toward the end of the show.

Talk about a transformation! Slay, ladies!

What do you think of Kaia’s ‘60s transformation? Share over @BritandCo.

Nicole Briese
Nicole is the weekend editor for Brit + Co who loves bringing you all the latest buzz. When she's not busy typing away into the wee hours, you can usually find her canoodling with her fur babies, rooting around in a bookstore, or rocking out at a concert of some sort (Guns N' Roses forever!). Check out all her latest musings and past work at nicolebjean.com.
Celebrities
Style News
Celebrities Fashion Week Lookalike