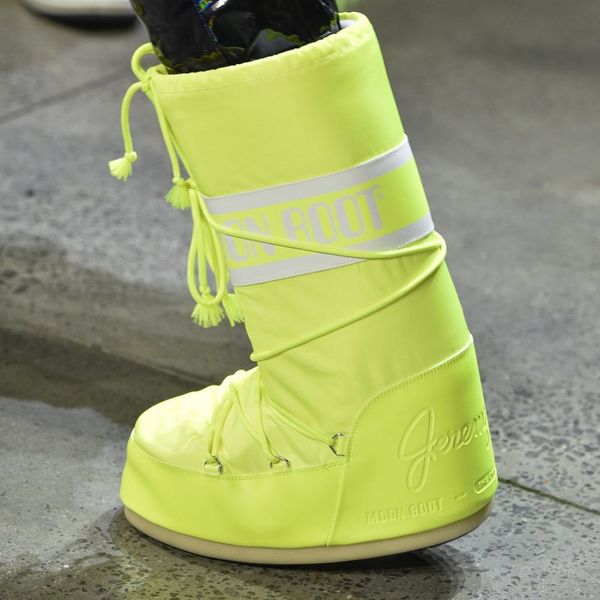 Move over, thigh-high UGGs! We’re but a few days into New York Fashion Week, and already, we’ve seeing the next big thing in couture footwear courtesy of the out-of-this-world designs showcased by designer Jeremy Scott.

The Moschino creative director held his fall 2018 show for his own eponymous line at Spring Studios on Thursday, and while there were plenty of eye-catching details to note, from the multi-hued wigs models such as Gigi Hadid walked the runway in to the futuristic-looking eyewear and silver-tone apparel, it was the boots that had us doing a double take.

In place of your predictable heel, Scott created an attention-grabbing array of kicks that appeared to be fit for strolling the moon, Neil Armstrong style.

Dubbed “skyscrapers” by the fashion guru, the neon and glittered shoes appear to have either a padded outer layer that was a throwback to Moon Boots of yore or a Yeti-like outer layer of fur that came up over models’ knees, all of which were wrapped with tied bungee cords.

Men’s styles were slightly shorter than the women’s, hitting just above the ankle.

In addition to their visual appeal, they also appeared to be every bit as functional as they were loud — we don’t know about you, but we’d definitely take these babies out for a spin in a snow storm!

Looks like we know where we’ll be headed next winter — back to the future!

What do you think of Scott’s colorful creations? Share with us over @BritandCo.

Nicole Briese
Nicole is the weekend editor for Brit + Co who loves bringing you all the latest buzz. When she's not busy typing away into the wee hours, you can usually find her canoodling with her fur babies, rooting around in a bookstore, or rocking out at a concert of some sort (Guns N' Roses forever!). Check out all her latest musings and past work at nicolebjean.com.
Boots
Style News
Boots New York Fashion Week NYFW Shoes