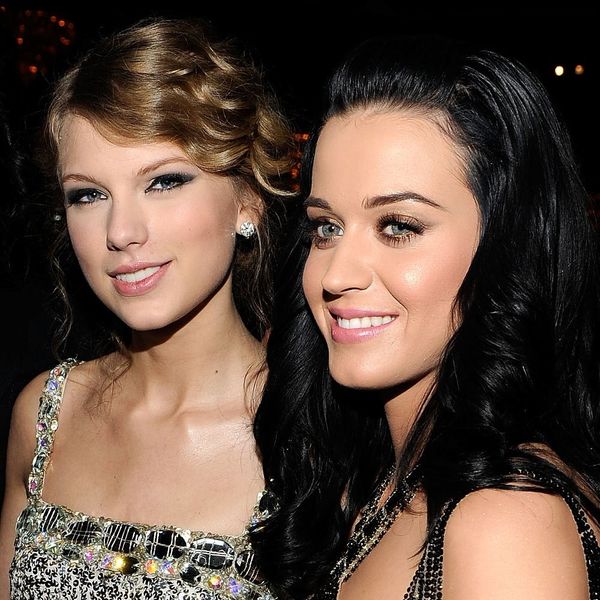 Despite rising above it all and admitting that there is *one* thing that would make her collaborate with Taylor Swift, it’s hard to deny that Katy Perry is currently shading Tay HARD in their ongoing feud. Not only did Katy apparently beat out Taylor for the coveted Olympic song honor as well as give her perfume a name that sounds like a total dig at the “Bad Blood” singer, but that might just be the tip of the iceberg. When reports came out that Katy had written a bunch of new songs that all throw shade at Taylor, it was enough of a burn. But now it looks like Katy is actually working with Taylor’s own producers on her new music. Ouch!

Though it’s not common knowledge outside of the biz, Max Martin and Shellbeck have worked with Taylor Swift on “We Are Never Ever Getting Back Together,” a beloved breakup tune for many Swift fans. And though it might seem like a total breach of loyalty on the part of the producers to now be working with Perry, this isn’t actually the first time Max has teamed up with Katy.

In fact, they’ve worked together since Perry’s debut LP, One of the Boys. Could this mean that we have things mixed up? Perhaps Taylor working with Max was a burn thrown Katy’s way. Hmm.

Granted, this might all just be a coincidence and there may be no shade behind Katy’s latest move, but with her ongoing feud with Taylor, it’s hard to imagine that it wasn’t part of the motivation (or at least a fringe benefit).

Do you think Katy’s move is yet another burn for Taylor? Tweet us @BritandCo!

Desiree O
Desirée O is a ‘Professional Bohemian’ who loves anything and everything related to the arts, entertainment, and pop culture. She ADORES being a ‘Newsy’ for Brit + Co, covering all of the latest tidbits of awesomeness that you want to read about. When she’s not writing, she’s either making messy art, going on long adventurous walks with her camera, or poking around over at bohemianizm (http://www.bohemianizm.com/). You can find out about Desirée O and her work at http://DesireeO.com/ or follow her on Twitter @DesireeO.
Katy Perry
Pop Culture
Katy Perry Taylor Swift
More From Pop Culture