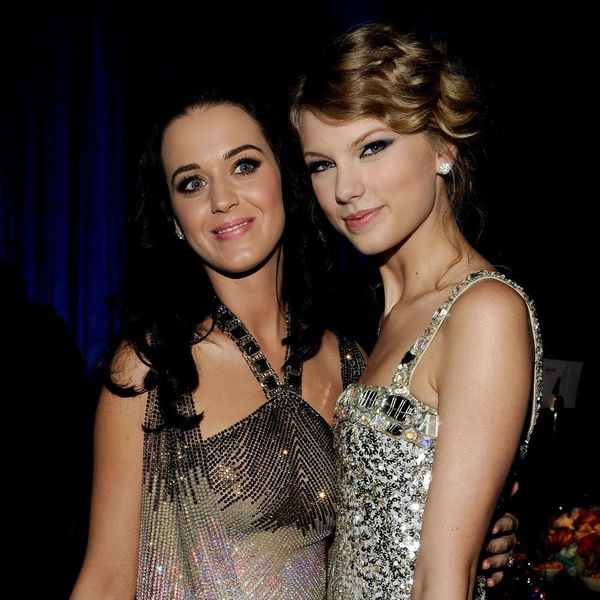 Long before Taylor Swift was duking it out with Kanye and Kim Kardashian West, she had another beef to contend with — one she felt so strongly about, in fact, that she (gasp!) wrote a song about it.

After Taylor reportedly penned “Bad Blood” about Katy Perry, who she insinuated to GQ stole backup dancers out from under Taylor in an effort to sabotage her world tour, Katy famously answered in kind with a tweet warning fans to “Watch out for the Regina George in sheep’s clothing,” cementing a growing rift in the ladies’ former friendship that has yet to be mended.

Since then, Katy has, for the most part, taken the high road regarding Taylor’s most recent beefs, but it appears she’s had her fill of remaining impartial. When asked by a fan during a Q&A earlier this evening about whether or not she’d ever collab with her former pal, Katy didn’t shy away from the question, addressing it head on.

“If she says sorry, sure!” she wrote. Whoa! We certainly weren’t expecting THAT, especially considering her recent perfume and song digs at her fellow pop star.

Though she didn’t get into details about what exactly she wanted Taylor to apologize FOR (bashing her in GQ? Writing “Bad Blood?” That Selena Gomez lookalike fight scene in the accompanying video? Something else entirely?), it’s a prospect that has us freaking. Out.

Unfortch, we’ve got a sneaking suspicion that Katy shouldn’t hold her breath After all, “band-aids can’t fix bullet holes,” areweright?

And yet… maybe there’s hope after all? With a string of bad press and breakups as of late, it certainly couldn’t hurt Taylor’s image to (re)make a few friends in high places: Just look at the magic that went down when Nicki Minaj and Taylor took the time to talk things out following their own misunderstanding!

We, for one, can’t think of a more insanely badass power duo than these would be together, so fingers crossed that Tay concedes!

Would you be pumped to hear a Katy/Taylor collab? Share your opinion over @BritandCo!

Nicole Briese
Nicole is the weekend editor for Brit + Co who loves bringing you all the latest buzz. When she's not busy typing away into the wee hours, you can usually find her canoodling with her fur babies, rooting around in a bookstore, or rocking out at a concert of some sort (Guns N' Roses forever!). Check out all her latest musings and past work at nicolebjean.com.
Controversy
Celebrity News
Controversy Katy Perry Music Taylor Swift