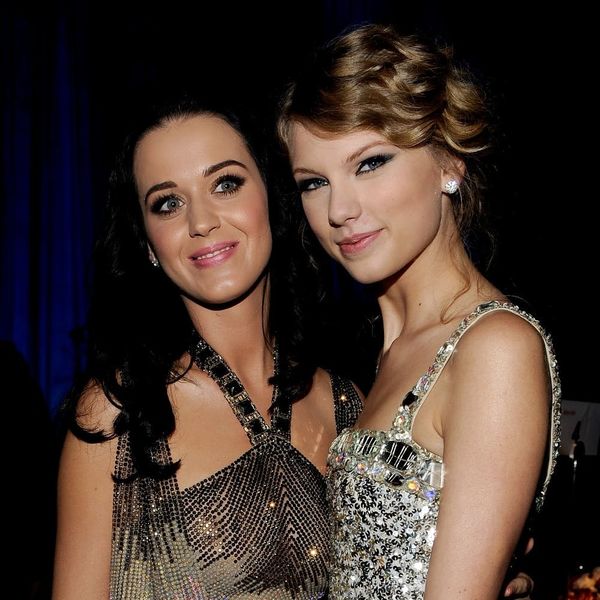 Oh, the ever-complicated case of the Tay-Kat celeb frenemy sitch. While it seems like Taylor Swift (and Tom Hiddleston) and Katy Perry (and Orlando Bloom) are all about the love these days, it turns out their frenemy history might not be so far behind them.

If you remember back, the original spat sparked over the internet after Taylor’s “Bad Blood” hit the scene. The beef buzzed when Katy reacted to the song and video by tweeting a not-so-favorable review.

Although things seemed to have chilled out lately, eyebrows are raising over a new drama-based development, and it’s all about Katy’s new perfume. Following 2015’s Mad Potion, the newest scent is deemed Mad Love. Hmm… that sounds suspiciously familiar.

Those in the know will immediately be reminded of one particular “Bad Blood” lyric: “baby now we’ve got bad blood / you know it used to be mad love.” Is this the inspiration behind Katy’s new perfume?

It looks like while Katy once accused Taylor of “capitaliz[ing] on the take down of a woman,” it kinda seems like the “I Kissed a Girl” singer is doing the same thing by throwing some sweet-smelling shade at Taylor. Or rather, a “luscious fruits, woods and musk” smelling shade. It’s a $30 celeb-style burn… or a really, really uncanny coincidence.

Do you think the name Mad Love is a dig at Taylor or just a coincidence? Tweet us @BritandCo!

Desiree O
Desirée O is a ‘Professional Bohemian’ who loves anything and everything related to the arts, entertainment, and pop culture. She ADORES being a ‘Newsy’ for Brit + Co, covering all of the latest tidbits of awesomeness that you want to read about. When she’s not writing, she’s either making messy art, going on long adventurous walks with her camera, or poking around over at bohemianizm (http://www.bohemianizm.com/). You can find out about Desirée O and her work at http://DesireeO.com/ or follow her on Twitter @DesireeO.
Katy Perry
Celebrity News
Katy Perry Taylor Swift
More From Celebrity News