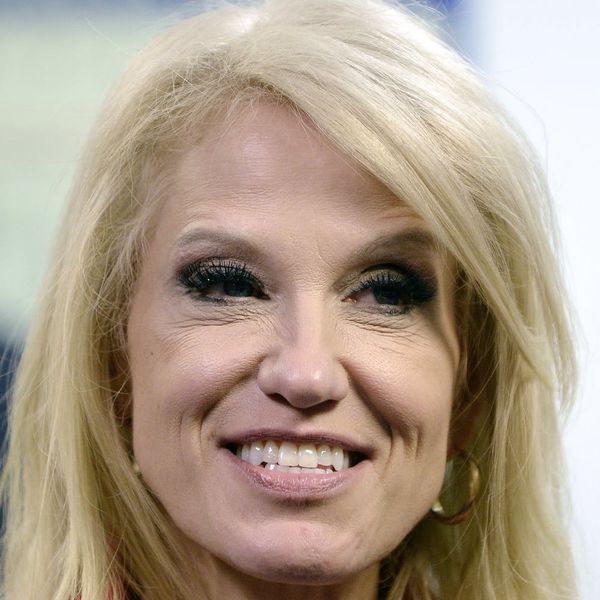 It’s not uncommon to see Kellyanne Conway’s name in the news these days: As a counselor to President Trump, she often speaks on behalf of the White House (and sometimes mucks it up in the process: See her Ivanka Trump endorsement and Bowling Green massacre scandals). Today, however, she has the internet up in arms for an entirely different reason.

During a meeting between President Trump and a number of representatives from historically black colleges and universities, Conway (along with a number of professional photographers) was angling to get the perfect shot of the group. To do so, girl positioned herself on the Oval Office furniture in a rather unconventional manner.

People were instantly up in arms, calling out what they deemed a lack of professionalism and manners for deigning to put her feet on the White House furniture.

@aravosis For real. Did you see pic Reagan Battalion just posted of Kellyanne Conway on the couch being disrespectful to the occasion?

Can Someone Tell Beavis To Get Her Damn Shoes Off The Couch?!

Seriously. Why is Kellyanne Conway sitting on her knees like that on the couch in the Oval Office. I'm uncomfortable.

Honestly, would it be so hard for KellyAnne Conway to maintain a little professionalism and just keep her heels off of the couch?

Still, there are plenty of others sticking up for her, with many pointing out that President Obama was often photographed with HIS feet on both the desk and the table of the same office, as had other women before her.

Kellyanne Conway ain't the first woman to put her feet on the couch. Stop the silliness.https://t.co/dORxs1V4Rw pic.twitter.com/X6AmUqnzZZ

People "outraged" at Kellyanne Conway putting her feet on a couch so she can take a photo, but… pic.twitter.com/6IW5Iv31qW

Who cares if Kellyanne Conway sat on the couch in the Oval Office like a child or if any of the presidents put their feet on the desk. 🙄🙄🙄🙄🙄

While we can see how some might find the act to be disrespectful, given the importance of the occasion, we can also see the double-standard happening here. Whether folks weren’t as outraged by President Obama’s casualness because of his gender or because he was simply better received by the public, we may never know, but one can’t deny it’s a double-edged sword.

We, for one, think she looks kinda comfy!

What do you make of Kellyanne’s couch debacle? Share with us over @BritandCo.

Nicole Briese
Nicole is the weekend editor for Brit + Co who loves bringing you all the latest buzz. When she's not busy typing away into the wee hours, you can usually find her canoodling with her fur babies, rooting around in a bookstore, or rocking out at a concert of some sort (Guns N' Roses forever!). Check out all her latest musings and past work at nicolebjean.com.
Controversy
Politics
Controversy Politics twitter
More From Politics