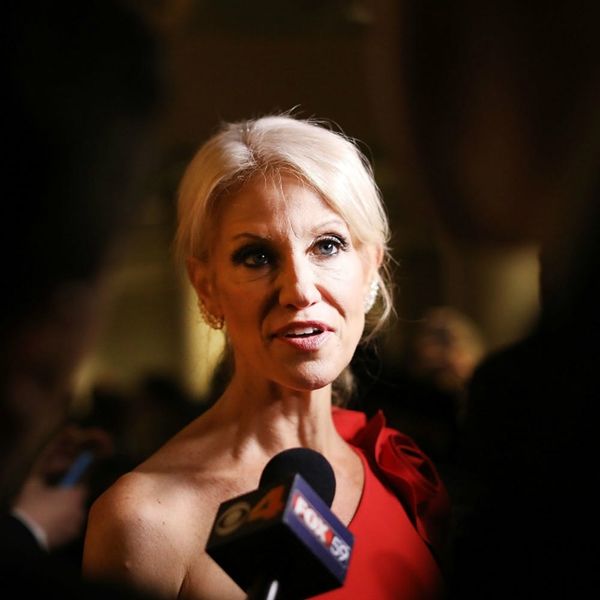 While Kellyanne Conway isn’t the Press Secretary (that job’s been given to Sean Spicer, the man who hates Dippin’ Dots), she does relay the President’s messaging on most news shows. Just one week ago, she was getting thrown some serious shade after coining the term “alternative facts,” and now, she’s taking that idea and really bringing it home. In order to defend the executive order forcing a travel ban, Conway made up a tragic event and then lied about it on TV.

During an interview on MSNBC with Chris Matthews, Conway cited what she called “The Bowling Green Massacre,” an event, she says, that happened when some Iraqi refugees were not properly vetted and went on to plot and execute a terrorist attack in Bowling Green, KY. Except that never happened.

Later, Conway retracted her message in a Tweet, claiming she meant to mention two Iraqi men who were charged and went to jail for trying to send money and weapons to Iraq while we were engaged in the war with that country. Because of these men, the government became far more stringent in vetting all immigrants and refugees. Conway’s insistence that the “Bowling Green Massacre” happened, but that the media failed to report it is very dangerous. Nevermind the fact that Chris Matthews doesn’t even call her out on this alternative fact, but goes along with his line of questioning.

As per usual, however, the internet had at Conway for her alternative fact-building with absolutely zero chill.

One still shudders to think how bad the Bowling Green massacre would've been if not for the heroic intervention of Fred Douglass.

Here are all the names of the people that perished in the Bowling Green Massacre. May they Rest In Peace pic.twitter.com/vB3k6vNz2y

What comedic hot takes are helping you see through the mega drama happening in politics? Tell us @BritandCo!