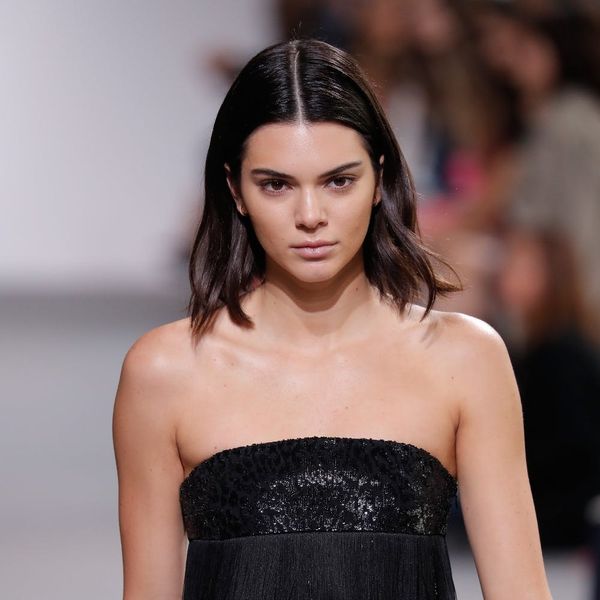 While Kylie Jenner is getting her very own show (prepare yourself for The Life of Kylie, reality TV fans!), things aren’t going so smoothly for her big sis, Kendall Jenner. Not only was she caught up in one of the biggest advertising fails we’ve witnessed in ages with her controversial Pepsi commercial, a new Keeping Up With the Kardashians teaser reveals that she’s now worrying that her career might end up totally “tarnished.” But not for the reason you’d expect.

While Kendall Jenner was apparently “traumatized” by the reaction to her Pepsi commercial, it turns out that it’s not the only career-related situation that’s been causing her concern. In a new teaser clip for Keeping Up With the Kardashians, the 21-year-old stressed over an upcoming Vogue review of her clothing line.

“F*ck! I don’t know why I’m so nervous,” she exclaims while sorting through samples of her collection and chatting with a platinum blonde Kylie. “I’m really proud of the line, but I’ve worked really hard to be taken seriously and recognized in Vogue and in the fashion world. If this doesn’t go as well as we hope, it might tarnish some things in the modeling world, so it’s even more frightening.”

Granted, the powerhouse magazine can indeed make or break you in the fashion biz, but considering Kendall Jenner’s recent Pepsi-related troubles, we’d have to say that a bad Vogue review is among the least of her worries, right now. As she says herself, “Everyone is looking for a reason to talk sh*t. I don’t want this to be that reason.” Don’t worry, Kendall, it’s not. *cringes while checking out people’s reactions to the Pepsi commercial again*

Do you think Kendall Jenner’s reputation has been “tarnished” by recent events? Let us know @BritandCo!

Desiree O
Desirée O is a ‘Professional Bohemian’ who loves anything and everything related to the arts, entertainment, and pop culture. She ADORES being a ‘Newsy’ for Brit + Co, covering all of the latest tidbits of awesomeness that you want to read about. When she’s not writing, she’s either making messy art, going on long adventurous walks with her camera, or poking around over at bohemianizm (http://www.bohemianizm.com/). You can find out about Desirée O and her work at http://DesireeO.com/ or follow her on Twitter @DesireeO.
Kardashians
Celebrity News
Kardashians Kendall Jenner
More From Celebrity News