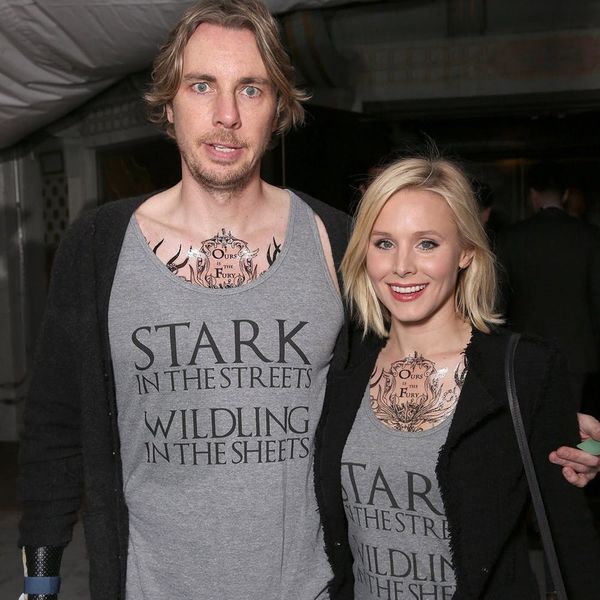 Attention all you GOT fanatics, the season six premiere is finally a mere TWO WEEKS away. Please excuse us while we re-watch the last season and try to remember what all the characters’ names are (LOL jk, that’s an impossible task). Last night some of the show’s biggest cast members headed to LA for the premiere. While Sansa – sorry, Sophie Turner – looked like a medieval princess in an epic crown braid and Maisie Williams rocked some fan-approved GOT nail art, Kristen Bell and Dax Shepard showed up in a slightly different sort of ensemble.

The hilarious duo showed up not in a formal dress and tuxedo, but instead in the ultimate GOT fan gear. Kristen Bell shared this snap of the two of them on Instagram alongside the caption, “Dax and I went to the premiere of #GOT last night. Everyone was in suits and dresses. People were sipping cocktails. We were in tank tops that said ‘Stark in the streets, Wildling in the sheets.’ We sported temporary tattoos that said ‘Ours Is The Fury and Winter Is Coming.’ At one point I lifted a cantaloupe in the air and said ‘This egg shall change history’ and ran out the fire exit.”

If this is how they dress for the season premiere we can only imagine what their viewing parties look like. Ahem, you two, our HQ is in SF if you’d like to send an invite our way.

PS! If you’re dying for that tee you can find it here!

Cortney Clift
Cortney is the senior writer and special projects editor at Brit + Co. She typically covers topics related to women's issues, politics, and lifestyle. When she's not buried behind her computer you'll find her exploring New York City or planning her next big adventure.
Game of Thrones
Pop Culture
Game of Thrones