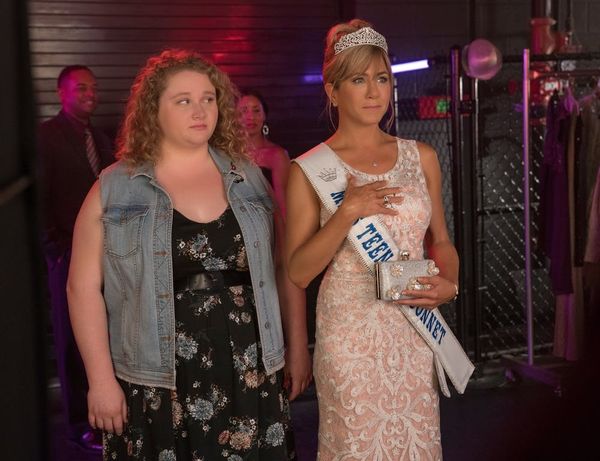 Netflix has some big films with big names planned for the rest of 2018, including, notably, Dumplin’, starring Jennifer Aniston and Danielle Macdonald. The movie, which begins streaming on Friday, December 7, was adapted from Julie Murphy’s novel by screenwriter/producer Kristin Hahn, who was so inspired by the story that she started writing the script even before she had been hired.

For those who haven’t read the book, a brief summary: Willowdean (Macdonald) is the outspoken, plus-size, Dolly Parton-obsessed teenage daughter of pageant queen Rosie Dickson (Aniston), who runs the town’s annual Miss Teen Bluebonnet pageant. Willowdean despises the pageant and everything she thinks it represents, so she decides to enter — against her mother’s wishes — to make a point about beauty and acceptance and inclusivity. What starts as a little act of rebellion soon turns into something bigger, though, as other girls join her in her cause.

Hahn first read Murphy’s YA novel shortly after it came out in 2015. She was home sick — with typhus, of all things — and the book was her entertainment, and eventually her “light at the end of the tunnel,” while she was stuck in bed. “I fell so in love with it,” she tells Brit + Co. “I actually think it helped me get well, because I called my agent and said, ‘I have to write this movie.'”

Hahn’s agent got her a meeting, which she had to postpone multiple times because she was still too ill to leave the house. On the first day she was well enough to stand for any period of time, she took her shot. “I was super pale. I must have looked like a ghost,” she recalls. “I was not my best. But I pitched my heart out.”

By that point, even though she didn’t yet have the job, she had already written a good chunk of the screenplay. “I said to them in the meeting, ‘I’m already writing the movie. I’ve written the first half, so I hope you hire me.'”

They did, and Hahn finished the script not long after. When she was done, she sent it to her BFF and Echo Films co-founder, Jennifer Aniston, who jumped onboard not just as a producer but also as Willowdean’s mom, Rosie. “Jen is kind of my Ellen,” Hahn says, referring to Willowdean’s best friend. “And she really got how important it was to get this movie made and get this story out there.”

As for why Hahn felt, and still feels, so passionately about the film? “I think it’s hard to find a story about a character like this. We don’t see representations of women like Willowdean in enough movies. I felt like it was a mission to get this character on screen,” she says.

“I love so many things about it. I love her relationship with her mother, and the journey they go through in seeing each other in a different light by doing a pageant together. I love the relationship with her best friend, and the fact that Willowdean is a character who definitely experiences judgment because of her size, but who also judges other people. She’s not immune to the thing she rails against, and she has to go through her own process of healing from that. And she does that through these friendships that she finds in these girls that she never expected to have anything in common with.”

There’s a romantic plot line, too — it’s in the trailer, so that’s not a spoiler — but for Hahn, the most important relationship in the film (and the book) is the one Willowdean has with herself. “I loved so much that it was not about a girl getting a boy, that that was not the main focus and thrust of the story,” she tells us. “It’s a love story, in my opinion, about a girl falling in love with herself so she can have deeper, better relationships with everyone in her life.”

That’s the message Hahn wants to impart with the film. “I hope people take away a dose of self-love and remember that when we judge people for their exterior, we limit ourselves. We deprive ourselves of potentially amazing friendships, incredible life-changing encounters, because we are scared. Judgment is fear, and getting past whatever judgments we have is the first step to actually having a bigger life,” she says. “And I hope people take away how awesome it is to have female friendships that are supportive and truly unconditional. We all deserve that. And if we don’t have it in our lives, I hope we go and find it.”