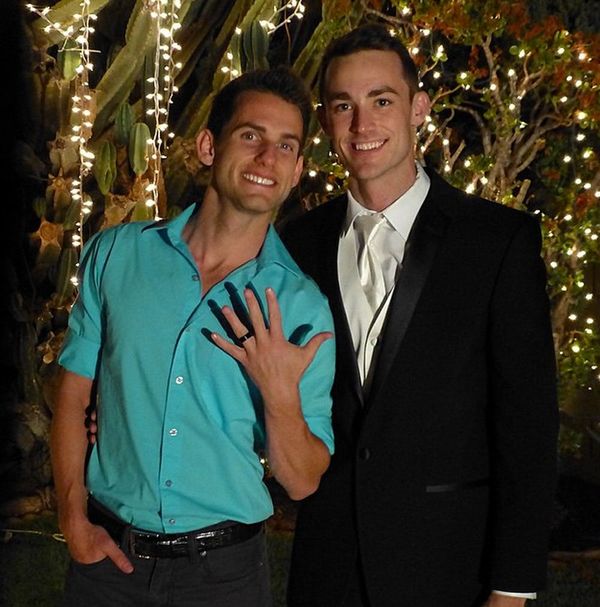 Dating isn’t the same as it used to be. It doesn’t take a genius to figure that out. Whether you initially met your match via the web or keep that long distance relationship going strong through Skype sessions, technology hasn’t necessarily killed romance, but rather has presented a new way of going about it. That idea couldn’t be more true for Ryan Donegan, who recently proposed to his boyfriend via Instagram.

During a sunny Saturday in LA, Ryan posted videos to his boyfriend Scott via Instagram. He started in the morning by instructing him to “open the door,” where Scott was surprised by a visit from friends. A little later Ryan posted another video telling Scott to head to the beach. Upon arriving, Scott found even more of his friends ready for an oceanside picnic. After they had their share of sun, Ryan took to Instagram again to tell Scott to head over to his family’s house where he and his niece shared his favorite cookies. And if that wasn’t enough fun, Scott was then told to head to a restaurant for delicious dinner.

Then, the real romance started. Ryan posted a video of a walkway filled with candles and adorable pictures of the two of them along with a brief set of instructions: “It’s time to come home.” You can probably guess what happened next. As Scott arrived back at their house he found Ryan in the backyard with one big question. Not surprisingly, Scott replied, “Oh my god, so much yes.” Okay guys, just go ahead and melt our hearts, why don’t you?

An Instagram proposal is a cute idea for any couple, but it was particularly suiting for Scott and Ryan. Out explains that couple met two years ago after Ryan found Scott on Instagram, liked a bunch of his photos, then private messaged him to ask him out. After they met up IRL, Snider posted a pictured with the caption “Swooning… Had an awesome time tonight.” After that, the rest was history.

So what can we take away from Scott and Ryan’s story aside from our daily dose of cute? If you spy a cute dude on Instagram, DOUBLE TAP.

What’s your take on this creative proposal idea? Share with us in the comments below.