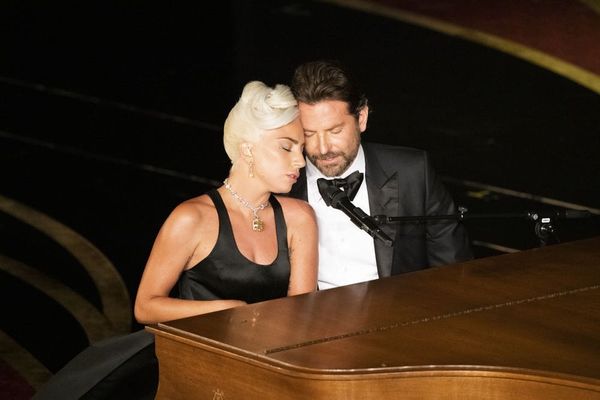 Lady Gaga and Bradley Cooper’s intimate “Shallow” performance at the 2019 Oscars had people dreaming up a real-life romance between the A Star Is Born costars — which was kind of the point, according to Gaga.

“Yes, people saw love, and guess what? That’s what we wanted you to see,” the new Oscar winner told Jimmy Kimmel on Wednesday, February 27. “This is a love song, ‘Shallow.’ The movie, it’s a love story. From a performance perspective, it was so important to both of us that we were connected the entire time. When you’re singing love songs, that’s what you want people to feel.”

Gaga, who won the Best Original Song Oscar for writing “Shallow” with Andrew Wyatt, Anthony Rossomando, and Mark Ronson, went on to explain just how much thought and planning went into the captivating duet — which ended with her and Cooper singing at a piano, cheek-to-cheek.

“We worked all week on that performance,” she said. “Bradley, he directed the movie obviously, and he directed all the musical moments, and I knew he had the vision for how it should go. He laid it all out, and everything that you saw — the way they pushed the piano out, us walking up on stage — that was all him.”

As for that look of love everyone is reading so much into? “I’m an artist and I guess [Bradley and I] did a good job,” she quipped. “Fooled ya!”

Gaga and Cooper’s chemistry as Ally and Jackson Maine captivated fans even before the movie’s release, and their close friendship has led some to hope that they’re actually in love (especially given Gaga’s recent split from her fiancé Christian Carino). Cooper, though, is happily in a long-term relationship with Irina Shayk, so shippers will have to settle for watching him and Gaga on screen.

Fortunately for fans, Warner Bros. announced this week that A Star Is Born will be making its way back to theaters with 12 additional minutes of brand-new Ally and Jackson footage to swoon over.

What did you think of Gaga’s response to the romance rumors? Let us know @BritandCo!