These Stylish Lamps Are Made by Robots 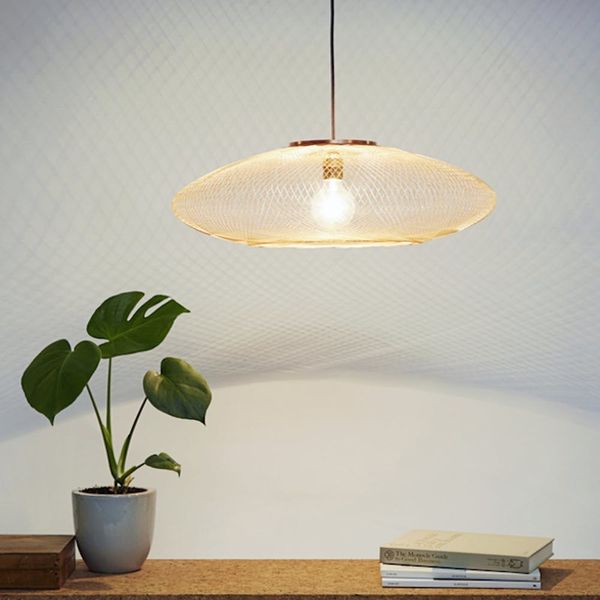 Keeping up with the latest and greatest in modern home decor can be tough. But if you’re looking to redecorate your house with a more modern aesthetic, you’ll be pumped to know there’s a company that uses robots (yes, robots!) to build its lamps. Does it get more modern than that? Oh yes, it does. These lamps are also shaped like UFOs to create a futuristic look for your kitchen or office space.

Rotterdam-based Atelier Robotiq uses robots to weave fiber cords that create these uniquely shaped Fiber Pattern Lamps. And because they’re made from fibers, you can imagine these lamps are practically as light as a feather. According to Design Milk, the product weighs less than the iPhone 6. The lamp series comes in charcoal black, chalk white and copper, and each one features a copper pendant, braided cotton cord and Edison-style bulb. They are a bit of an investment — running a little under $400 — but are definitely a statement-making addition that would look great in any space.

Using robots isn’t the only trick up Atelier’s sleeve — the company also has 3D printers and laser cutters to create its decor. But that doesn’t mean there’s no human craftsmanship involved. According to the company, a large part of the staff’s time is spent behind workbenches welding frames and preparing molds. We can’t wait to see what else Atelier will build with a robot.

What do you think of the Fiber Pattern Lamp? Let us know in the comments.

Corie Hengst
Corie is a freelance writer, editor and self-proclaimed grammar nerd. Over the years, she has written and edited a variety of articles ranging from travel to finance to beauty. When she’s not writing, you can find her surfing travel websites, cooking and teaching at Gotham Writers’ Workshop in New York City.
Lamps
Home Decor Inspo
Lamps
More From Home Decor Inspo