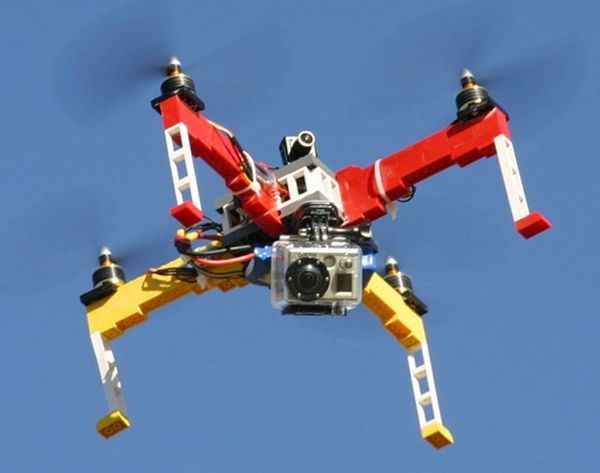 How do you get your Kickstarter project funded over 30 times your original goal amount? Make it out of LEGOs, duh. GenCode Systems in Tampa, Florida just blew their $200 goal out of the water, raising over $6,000 for their LEGO Brick Drone project. Turns out, people have always wanted to see LEGOs fly. (We knew we weren’t alone…)

The first autonomous LEGO quadcopter was completed last year by Software developer and Designer Ed Scott and his family. Ed later met up with 3-D printing pro Nick Margarone to make his personal LEGO drone into something anyone can make at home.

Given that their project was such a success, we’re sure we’ll be seeing LEGO drones flying around in no time. Besides the fact that a LEGO drone is really, really fun to build and fly, the guys have more in mind for the potential of their invention. They want this to be something that anyone can do. By making it simple and safe to build, robotics is no longer a scary sci-fi dream, but an innovation reality.

The best part about the drone is that you can do what you’d like with the LEGO frame and experiment with different shapes. And don’t forget the GoPro! What would a drone be without a camera attached to chronicle its adventures?

No word yet on when these DIY LEGO drones will be available for purchase, but we can’t wait to try one out for ourselves. Stay updated on the project’s Kickstarter page.

Where would you fly your LEGO drone? Let us know in the comments!

Katelan Cunningham
Katelan is a tech junkie obsessing over all things startup and design. She has entirely way too many apps on her phone and is no stranger to binge-watching. She accidentally fell in love in Los Angeles and that’s where she currently lives, writes, tweets and grams.
Kickstarter
Tech
Kickstarter lego