Everything You Need to Know About Drones in Under 5 Minutes 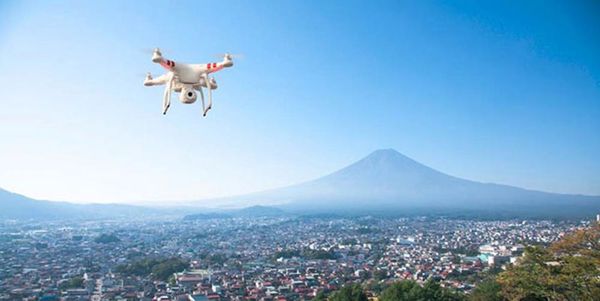 If you couldn’t tell by all the excitement behind Amazon Prime Air, drones are hot right now. Since they’re still in their infancy, we thought we should hit you with a beginner’s guide to these flying robotic machines. We’ve been schooling ourselves by keeping up with all the news and thought you should know what’s up, too.

A quick primer: Believe it or not, talk of drones started nearly 100 years ago. 1915 was the first year that Mr. Tesla (yes, the man Tesla Motors was named after) noted the use of drones in World War I. They were used as weapon and surveillance instruments. It wasn’t until the ’70s that things got real as people modified lawn-mower engines to carry up to 28 pounds for two hours. By the time 2008 hit, there were more drones in the air than manned aircrafts. Seriously!

These days, drones are moving out of the government and enterprise world and into the mainstream. They can even do SUPER CRAZY tricks! From snapping up aerial photos to parachuting books and burritos straight into your hands, drones have higher callings than to spy on your hunky neighbor… or is that exactly what they’re for? Only the future knows.

Things we think we’ll be doing with drones over the next few years:

Now, as exciting as this all is, which drone is the best to buy and try now? Here are 12 options that have our seal of approval.

1. Pocket Drone ($495): This tricopter is worth getting pumped about for a lot of reasons. For one, it folds up into a compact, easy-to-carry-around size — like it literally fits in your pocket. Despite its pint size (it weighs in at under one pound), it’s equipped with an action camera and can carry around a seven-inch tablet if that’s what you want it to do. For $495 via Kickstarter, you have lift off as soon as you open the box. Aerial photography enthusiasts, get enthused.

2. Blade mQX RTF ($90): If you’re a big believer that more propellers equal more fun, then this is the drone for you. They’re calling themselves the first quad on the market, and users are wagging their tongues about its durability and how easy it is to fly. We’re already hearing cries for a bigger model so that it’s more vide0-camera friendly.

3. Phantom 2 Vision ($1,200): This baby and that price tag is not for your casual drone recreationalist, but this one is actually our top pick from the list. The included camera has a 140-degree view and is best suited for serious YouTube-vid makers, owners of big estates in need of constant surveillance, and anyone with a mean case of paranoia. If you want to get in on the Phantom but don’t like the price, you can always go with the cameraless version with GoPro mount. That one will only set you back a cool $500. (Think of it as an investment!)

4. Gnat Shoot: The UK is taking skeet shooting to a whole new level. Clay pigeons have been replaced with a savvy and reactionary drone. Unless you’re super serious about shooting guns, this probably isn’t going to be something you’ll purchase yourself. But we do see shooting ranges in Nevada getting in on the system, which includes 14 targets, launchers, 100 spare wings, and all the ground support you need. Sounds like a fun 4th of July party activity? #godblessamerica

5. Walkera Infra X Smart Drone with Crash Avoidance ($80): If you’re the kind of person who throws airballs on the b-ball court, chances are you are either terrible at basketball or you’ve got bad depth perception. Take a deep breath, and rest easy, because someone has a made a drone for you. This one uses infrared radar that makes it nearly impossible to collide with anything, meaning it’s almost unbreakable while in air!

6. Flirtey: While everyone is still raising their eyebrows at whether or not Amazon Prime Air was actually something in the works or was just a media ploy, downunder in the land of Australia, they are very close to drone delivery. Zookal, a textbook rental company, is pairing with Flirtey to make books-delivered-to-your-door a reality in the very near future…like, as in the first part of this year. Our only question is, what’s the hold up, Amazon? While you think about that, we’ll not-so-patiently await the arrival of Flirtey, set to hit The States by 2015.

7. Ziphius ($199): Live a life aquatic? Not all drones are taking to the skies. Ziphius is heading to the waters as the first under-the-sea drone. It’s app-controlled, and you can get it at the ever-so-attractive price if you go with their DIY kit… which we obviously just ordered five minutes ago and kind of want to sell here on Brit + Co.

8. Burrito Bomber: Maybe you remember when we told you that one of the most wonderful things in the world had been invented. That wonderful thing was called the TacoCopter, and it was made to parachute tacos down to the good people of San Francisco. Well, a recent hackathon project from the engineers over at Yelp lead to what they are calling “the first airborne Mexican food delivery service,” which sounds great, except nothing is government approved just yet. But they’ve made all the details available via GitHub, so if you feel like dealing with lots of red tape and making folks with munchies around the world even happier, get on that.

9. Lego Mindstorms ($350): Alright, they aren’t exactly drones, but as you probably know by the numerousLEGOfeatures we’ve done in the past, we’re big fans of the snappable blocks. And nerds who are uber into DIY robotics point to the Mindstorms collection as a good place to get started on your journey to automated world domination.

10. Minidrone: Yes, we know we just told you about the Minidrone, but really, it’s SO GOOD! The makers of one of the most popular drones on the market, Parrot, basically took their uber-easy-to-use model and shrunk it. And the reason their products are so popular? Their app makes it incredible easy to fly. No pilot school necessary, meaning it’s great for amateurs and kids.

11. TU Delft Aerial Vehicle: A research university in the Netherlands isn’t going to develop a drone just for engineers to fly around the office on one of their recharge breaks. Nope. This drone has a higher calling. Its goal? To be small enough that firemen can keep them in their pocket and use them as a sort of scout when tackling a forest fire. And at .07 ounces, we think that’s a piece of equipment that any blaze fighter will be happy to have in their back pocket. (via Giz Mag)

12. 3DR Pixhawk ($280): 3D Robotics has a slew of drones that are worth mentioning, and while we’ve talked about their photo-snap-happy Iris in the past, we want to turn your attention toward the Pixhawk. This devices allows you to turn any autonomous vehicle into a drone that is controlled by your smartphone or tablet. Magic.

Are you honing in on drones? Let us know your thoughts in the comments below!

Lex Monson
Alexis is the co-founder of Punkpost, the app that lets you send handwritten cards (yes, handwritten by a real human) in the amount of time it takes you to send a text message. The exclusive card collections are created by a community of artists and designers and hand letter pressed on high-quality cotton paper. Get the full experience by downloading the app from the iTunes Store.
Tech
More From Tech