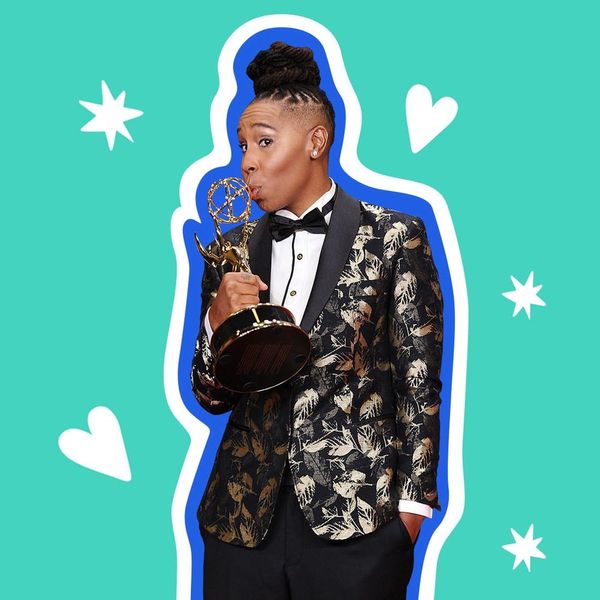 The 2017 Emmys were different from past ceremonies right from the beginning, when host Stephen Colbert opened the show with a musical number and a sharp, politically minded monologue. As he pointed out in his remarks, this year’s nominees were the most diverse ever, and multiple winners made history. But there was one winner, in particular, who stood out for her groundbreaking win: Master of None‘s Lena Waithe, who became the first Black woman to win an Emmy for Outstanding Writing in a Comedy Series.

Waithe won with writing partner and costar Aziz Ansari for their MoN season two episode “Thanksgiving,” which was already widely acclaimed as one of the series’ best episodes. When they took the stage to accept their award, Ansari stood back and allowed Waithe to have her moment in the spotlight.

After collecting her trophy, shouting out Maxine “Reclaiming My Time” Waters, and thanking Ansari for “pushing” her to co-write the ep, Waithe took a moment to honor her LGBTQIA family.

“I see each and every one of you. The things that make us different, those are our superpowers — every day when you walk out the door and put on your imaginary cape and go out there and conquer the world, because the world would not be as beautiful as it is if we weren’t in it,” she said to a rousing round of applause.

The “superhero” reference echoes something Waithe told the Los Angeles Times about the “Thanksgiving” episode, which is based on her real-life experience of coming out. Back in August, she explained that the way she was able to tackle writing about such a fraught time in her life was to come at it “from a hero’s perspective.” In doing so, she was better able to understand her mother’s point of view.

Waithe also said in the Times story that she initially wasn’t sure she wanted to write the episode. But Ansari and his co-creator, Alan Yang, knew it was a story only she could tell.

“Aziz was just like, ‘What you can do with this story… I can’t duplicate that,'” Waithe recalled. They ended up writing it together.

Besides her work on MoN, and her producing gig on Netflix’s Dear White People, Waithe has a new show, The Chi, which was picked up by Showtime earlier this year. The series centers around six characters in and around the South Side of Chicago.

Kat Armstrong
Kat has been a writer, social media maven and mom for longer than she's willing to admit. She's also spent time in front of and behind the camera, interviewing celebs, politicians and acting as a producer for fashion and artistic photography shoots. When she isn't writing for various orgs and publications, she's hanging with her kids, husband and French Bulldog, Peter, in Toronto, Canada.
Emmys
TV
Emmys
More From TV