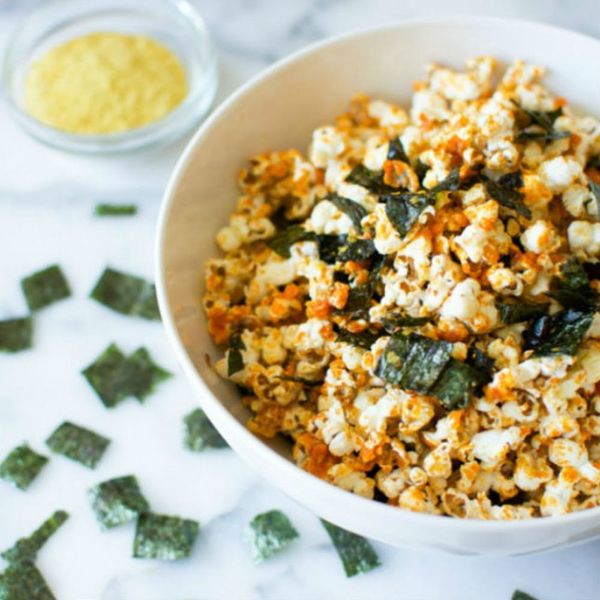 There’s a lot of speculation about what the next trendy superfood will be now that we’ve had *all* of the kale recipes. If you ask us, our bet’s on nutrient-dense seaweed. While we’re not certain just how ubiquitous this unique food may get — we’re into seaweed salads, but the idea of seaweed smoothies? Maybe kale can keep that one… — we do know that it is just as easy to add into your everyday meal game plan as any other green. As in, you don’t have to eat sushi seven days a week to work seaweed into your diet — far from it. Here are 11 recipes that might make you see the sea vegetable in a different, easy-to-eat light so that when seaweed reaches celeb status, you can tell all your friends, “Yeah, I liked seaweed before it was cool.”

This next-level burger inspired by shrimp toast packs a lot of flavor. The bright green seaweed slaw gives it a crunchy umami boost that will have your taste buds begging for more. (via The Kitchy Kitchen)

This refreshing cucumber salad uses dried wakame that’s rehydrated in water. The tender, slightly salty seaweed strikes a delicious balance with crisp cucumbers and sesame seeds. Sunomono can be eaten as a palate cleanser or enjoyed on its own. (via Dang That’s Delicious)

This dressing, made with dried sheets of seaweed (nori), is a sneaky way to get in more nutrients at meal time. It’s packed with fiber, calcium and iron and will turn any plain salad into an exciting new dish. (via Healthfully Ever After)

You won’t mind that there’s no meat in these veggie jims. In fact, you probably won’t miss those meaty jerkies ever again. These snacks are made with sunflower and pumpkin seeds, then wrapped in sheets or nori. You can snack easy now that you know exactly what’s in this jim. (via Lexie’s Kitchen and Living)

This is no Jacques Pepin omelette, but who cares. It’s delicious for breakfast on its own, lunch in a bento box or dinner over rice. The seaweed rolled into the middle gives this egg dish bite and a little bump of flavor. (via Kitchen Bowl)

This traditional Japanese salad is a mouthwatering combination of salty and sweet from being cooked in soy sauce and sugar. If you love Japanese food, you’ll be down with this salad. (via Just One Cookbook)

This hot dog is based on a dog served at a restaurant and food cart in Vancouver. If you can’t make it over there to try this hot dog, it’s easy to make at home. Just combine teriyaki sauce and mayonnaise with a seaweed topping. It’s like taking a bite out of vacation. (via Sweet Little Kitchen)

We know what you’re thinking: Finally, you can make seaweed chips at home! They take almost no time to make. Brush with seasoning and sesame oil, then lightly toast and you’re ready to munch. (via Broad Appetite)

This seaweed-spiked mayonnaise is as addicting as dip. It’s salty, smokey and all-around delicious. Try it on a sandwich with smoked fish and fresh herbs. (via Bon Appètit)

This mix is like eating sushi in popcorn form. Okay, not really, but it’s tasty, especially if you’re a fan of umami flavors. (via Root and Revel)

This sweet and savory nori granola is genius. Elevate your soups and salads by adding this granola. Japanese flavors like black sesame and miso really complement the nori. It’s so good, you might start putting it in your yogurt every morning. (via Maikin Mokomin)
Samantha Simon
Healthy Recipes
Healthy Eating
Healthy Recipes
The Conversation
Reviews:
More From Healthy Eating