18 Fuss-Free Breakfast Recipes That Kill It in a Skillet 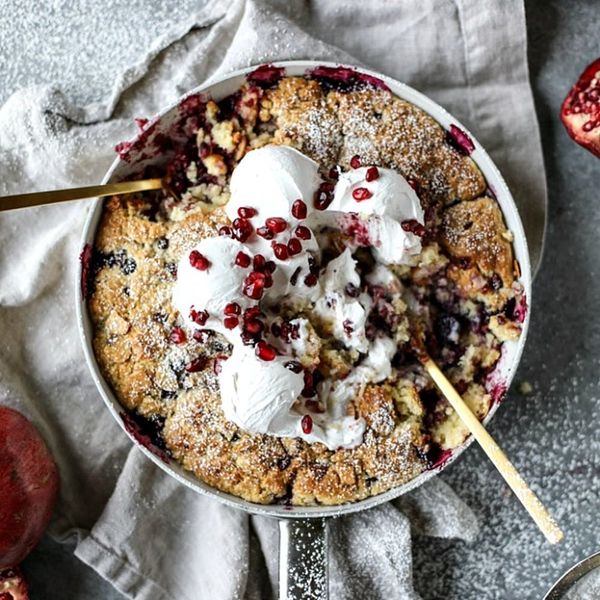 Lazy weekend breakfasts are the best, no question about it. It’s crucial to take a well-deserved break from the usual grab ‘n’ go muffin — you know, the one you end up wolfing down in your car — and lounge in your pajamas savoring a breakfast casserole. If you’ve got a family to feed, you might be thinking that this is all easier said than done. But we’ve got 18 no-hassle skillet breakfasts that will feed the masses while allowing you to kick back.

Digging into this saucy polenta dish first thing in the morning sounds like a great way to kick things off. There’s also a ton of nutritional value here, so you can #TreatYoSelf without falling off track. (via Ambitious Kitchen)

Now that winter is *sort of* nearing its end, we should probably take advantage of what time we have left to garnish our eats with those pretty pomegranate arils. This skillet cobbler is the way to do it. (via How Sweet It Is)

Cinnamon buns are all kinds of fantastic, but homemade cinnamon buns fall into a totally different ball park. These gems are swirled with a brown sugar and pecan filling, then slathered with cream cheese frosting. (via The Sweet and Simple Kitchen)

This indulgent Southern classic is a stick-to-your-ribs kind of breakfast, so you won’t be running a marathon afterward, but it’s worth it. (via Garnished Plate)

It isn’t summer yet, but we can dream a little and this skillet cake will help. Nothing fills a kitchen with the smell of a summer morning better than baked blueberries. (via Camille Styles)

For those mornings that have you feeling like a kale smoothie is boring AF, don’t fret. You can get a healthy dose of super greens by baking this tender garlicky frittata instead. (via B. Britnell)

A “soufflé” may sound a little fancy, but don’t be hesitant. This fluffy and delicious skillet breakfast is simple to make, and the whole crew will lovingly devour it. (via The Weary Chef)

For anyone who loves the delicate texture and smoky flavor of smoked salmon, this springy dish brings bright flavors together for a perfect way to start a lazy Sunday. (via The Bay Leaf Kitchen)

When handheld cinnamon rolls just don’t cut it, make a giant one. This bad boy can serve a crowd, but if you simply make it for your fine self, we won’t judge. (via Yin and Yolk)

If you want a breakfast that is jam-packed with flavor but doesn’t lead you straight into a carb coma or sugar crash, this egg bake is where it’s at. Briny olives and tangy feta bring punchy flavor to this feel-good option. (via The Modern Proper)

Baked in a skillet, this beautiful, rustic breakfast is GF and sans refined sugar. (via Rhubarbarians)

This hassle-free hash is weekend breakfast perfection. It’s packed with nourishing veggies, all while treating you with some salty and scrumptious chorizo. (via Wicked Spatula)

Red velvet fanatics will be wooed by this crimson delight. Thick and hearty, cocoa cake is baked in a skillet and drizzled with a cream cheese glaze that can’t be denied. (via Well Plated by Erin)

Savory bread pudding? With Italian bacon in it? Oh heck yes. This spin on bread pudding is all we need in our lives. (via Seasons and Suppers)

It doesn’t get much creamier and dreamier than a heaping mound of velvety and cheesy grits. There’s a reason this Southern staple is considered its own food group, and this recipe is easy enough to find that out for yourself. (via Peas and Crayons)

This cozy skillet bake is what lazy days are all about. With mushrooms, onions, eggs, and a tasty sauce, this recipe is perfect for breakfast, brunch, or even a lazy weeknight dinner! (via Thoughts Over Chai)

Bringing sweet potatoes and kale into a breakfast hash has been a popular option for quite some time now. There’s a reason this fad hasn’t phased out: It’s healthy and downright delish — the best of both worlds. (via Jar of Lemons)

“Come and Get It” Huevos Rancheros Skillet

In an effort to please everyone, which can often feel impossible, this huevos rancheros skillet delivers. Prep everything in one spot and let everyone take care of themselves while you sit back and sip your coffee (or mimosa). (via Mexican Please)
Dana Sandonato
Born in Canada and now living in the beautiful state of North Carolina, Dana is a coffee-reliant food writer with a healthy appetite, a taste for culinary adventure, a thirst for good beers, and an endless hunger for food photography. When not writing for Brit + Co, she can be found pouring herself into her blog-turned-webzine, Killing Thyme, or taste-testing at local breweries with her husband. Dana's ideal down time includes pizza, marathoning on Netflix, or watching her fave flicks from the 80s and 90s - no matter how great or awful they are!
Breakfast Recipes
Healthy Eating
Breakfast Recipes Healthy Recipes recipe roundup
The Conversation
Reviews:
More From Healthy Eating