Surprise! Country Crooner Maren Morris Is Engaged With a Gorgeous Sparkler to Show for It 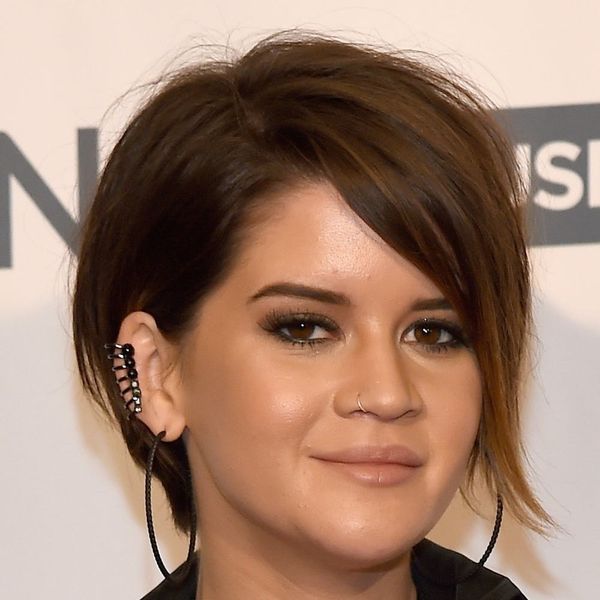 2017 is shaping up to be quite a wild year for country star Maren Morris! Not only did she take home her very first Grammy for Best Country Solo Performance, beating out music vets like Carrie Underwood and Miranda Lambert thanks to her hit single, “My Church,” but it appears the young crooner is now also engaged!

The 27-year-old didn’t need more than a single word to announce her happy news on social media, simply writing “Yes 💍” on a shot of herself sitting on musician and now-fiancé’ Ryan Hurd’s lap while holding a Corona Light, with one very visible addition to her left ring finger.

She gave us a closer look at the ring in a subsequent photo, throwing her arms around Hurd’s neck as her white manicured nails set off the sheen of her new sparkler.

The pair, who have been in each other’s musical orbits since 2013 and began dating two years later, after getting to know each other over beers during post-writing sessions, are responsible for the Tim McGraw recorded tune, “Last Turn Home.” “We would write and then we’d go over to a bar in midtown and have a couple of beers,” Hurd told People of the duo’s connection. “That’s when we started making a real connection, beyond a creative friendship.”

That connection not only resulted in McGraw’s single, but Hurd’s own “Love in a Bar,” which included such lyrics as, “We were just friends, just hanging, just sitting ‘round waiting for somebody to cross the line… Girl you just said what I was thinking, you weren’t afraid.”

Morris also spoke to the mag about their undeniable chemistry, saying, “We had been friends for only a couple of years, but there was always this writing chemistry in the room, and eventually, the timing of it was undeniable. We had such a foundation built off writing so many songs over the years that we were like, ‘Why are we avoiding this?’”

They’re certainly not avoiding it now! Hurd shared a shot of the two boating off into the sunset pre Fourth of July — a rather symbolic shot, as they’ll both be headed out on tour together this fall.

Here’s to wishing them all the best in their shared journey.

What do you think of Maren’s rock? Share with us @BritandCo.

Nicole Briese
Nicole is the weekend editor for Brit + Co who loves bringing you all the latest buzz. When she's not busy typing away into the wee hours, you can usually find her canoodling with her fur babies, rooting around in a bookstore, or rocking out at a concert of some sort (Guns N' Roses forever!). Check out all her latest musings and past work at nicolebjean.com.
Celebrity Engagement
Wedding Style
Celebrity Engagement Engagement Rings Music
More From Wedding Style