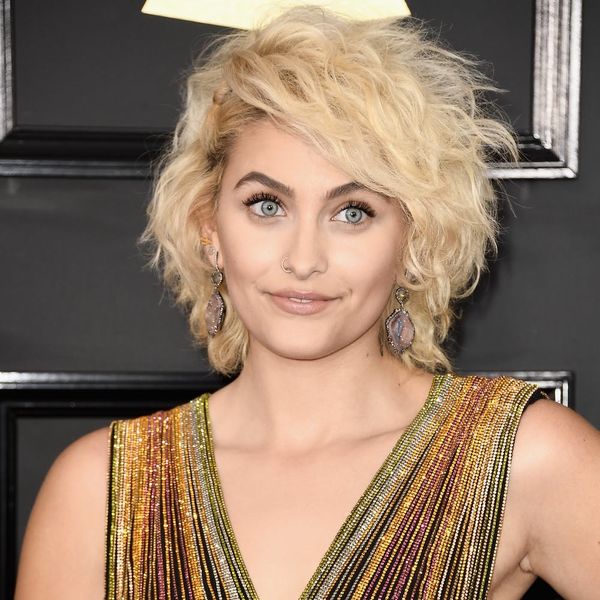 Tonight’s sure-to-be incredible Grammys performances (two names: newly blonde Katy and Gaga!) are at the forefront of our minds, to be sure, but before we get to that, we’re ever-so-slightly preoccupied peeping all the wild fashion the red carpet has to offer thus far. With an attention-grabbing pro-Trump dress courtesy of Joy Villa, a ball-pit skirt on Girl Crush and Paris Jackson’s slay-ready look, there’s a LOT to behold. See for yourself below!

1. Mya: Mya was feeling the Valentine’s Day spirit, donning an all-red suit with a pussy bow top over a red bra. (Photo via Frazer Harrison/Getty)

2. Lea Michele: Lea took advantage of the fun, youthful vibe of the Grammys carpet, opting for a two-piece Cavali number over a gown. (Photo via Alberto E. Rodriguez/Getty)

Jacqueline Van Bierk’s (who also made our list of most memorable Grammys looks of all time) Andre Soriano gown was nothing if not appropriate — CD discs for a music-filled evening. What could be more perfect? (Photo via Steve Granitz/Getty)

4. Girl Crush: Girl Crush, on the other hand, showed up in a ball pit — no, literally — an actual ball pit that’s been sewn onto her Amadour-designed skirt. We guess she plans on “having a ball?” *Har har* (Photo via Frazer Harrison/Getty)

KCav was one hot momma at tonight’s awards in a black slit-to-there frock with a sheer overlay and deep V-neck that had us flashing back to Mandy Moore at the Golden Globes. (Photo via Jon Kopaloff/Getty)

Singer Joy Villa made sure everyone would remember her look — and her name — at the water cooler tomorrow, removing an all-white robe to reveal a pro-Trump dress with the words “Make America Great Again” and “TRUMP” at the train. (Photo via Jon Kopaloff/Getty)

7. Adele: Adele broke from her traditional all-black uniform for tonight’s awards, and we’ve gotta say, we’re digging color on her! The sage green hue of her Givenchy gown makes her red hair and green eyes pop. (Photo via John Shearer/Getty)

Paris Jackson (AKA the next Gigi Hadid) brought a much-needed edge and cool yet glamorous vibe to the carpet, taking it from a spectacle to a real fashion event. (Photo via John Shearer/Getty)

Camila Cabello may have left Fifth Harmony, arriving to the awards show solo, but she certainly hasn’t left the style scene: She was feminine floral perfection in her light purple princess dress. (Photo via John Shearer/Getty)

10. Elle King: Elle King got uber-girly in a pretty-in-pink floral frock complete with a festival-style flower crown that has us longing for spring. (Photo via Alberto E. Rodriguez/Getty)

The Vampire Diaries star lent some intrigue to the carpet in an asymmetrical sequin striped gown with a single shoulder and a draped side train. (Photo via Steve Granitz/Getty)

13. Halsey: The “Closer” singer showed up in what appeared to be a pair of unbuttoned satin PJs in a striking shade of blue. TLC nostalgia much? (Photo via Lester Cohen/Getty)

14. Santigold: Santigold’s otherwise demure, Pepto Bismol pink collared gown got some intrigue in the form of its dragon graphic front and center. (Photo via Steve Granitz/Getty)

15. Kelsea Ballerini: Kelsea owned one of the prettiest looks of the evening in this delicate Ines di Santo sheer and nude floral gown. (Photo via John Shearer/Getty)

16. Katy Perry: Katy gave us a two-for-one special in this half gold-sequined Tom Ford top and feathered skirt. (Photo via Alberto E. Rodriguez/Getty)

17. CeeLo Green: CeeLo Green wasn’t about to let the ladies have all the fun, making a statement in a gold mask and… warrior garb? (Photo via John Kopaloff/Getty)

18. Carrie Underwood: Carrie, like Mya, threw some V-Day vibes our way in a red lace Elie Madi frock (despite the fact that she says she doesn’t wear red often) with a keyhole cutout and a front slit. (Photo via Stee Granitz/Getty)

19. Demi Lovato: On hand to give tribute to the Bee Gees, Demi donned this keyhole Julien Macdonald dress with sheer slits that looked just as good going as it did coming. (Photo via John Shearer/Getty)

The newly single JLo didn’t look any worse for wear in this absolutely gorgeous Ralph and Russo keyhole gown — a quickly emerging theme for the night. (Photo via John Shearer/Getty)

21. Charli XCX: Charli XCX was romantic as could be in a rose-red Vivienne Westwood pintucked piece with its sweetheart neckline and embroidered floral detailing. (Photo via John Shearer/Getty)

24. Lady Gaga: If your jaw wasn’t already on the floor after all of that, leave it to Lady Gaga to do the trick. We don’t even know WHAT to say about this Dominatrix-esque chain-and-leather (pleather?) feather peekabo number, so we’ll just leave this here. (Photo via Alberto E. Rodriguez/Getty)

Nicole Briese
Nicole is the weekend editor for Brit + Co who loves bringing you all the latest buzz. When she's not busy typing away into the wee hours, you can usually find her canoodling with her fur babies, rooting around in a bookstore, or rocking out at a concert of some sort (Guns N' Roses forever!). Check out all her latest musings and past work at nicolebjean.com.
2017 Style Trends
Celeb Style
2017 Style Trends Celebrity Style Red Carpet
More From Celeb Style