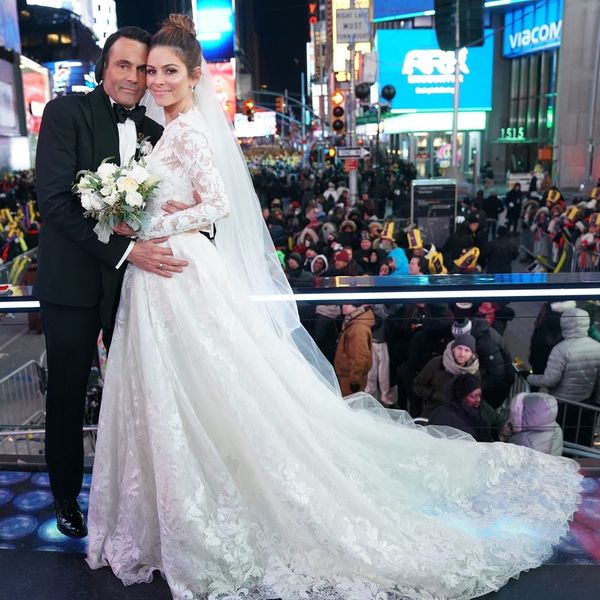 Maria Menounos will surely always remember 2017 as one of the most memorable years of her life. After undergoing surgery to remove a brain tumor back in June, she decided to end the monumental 12 months on a happier note, by marrying her partner of 20 years, Keven Undergaro, on a live New Year’s Eve show.

Hosting Fox’s New Year’s Eve extravaganza last night in New York, the 39-year-old had a big surprise for her parents, Constantine and Lisa Menounos, who were in the crowd. “[We’re getting] married,” she told her mom and dad, who were both shocked and thrilled. When her dad mistakenly thought his daughter meant that wedding plans were finally in the works, she corrected him by saying, “Oh no, Dad… We’re not getting married in the church, because we’re getting married right here tonight in Times Square.”

Explaining why she and her love had decided to finally tie the knot after so long, Menounos told her mom (who is currently battling stage 4 brain cancer) that Kris Jenner had given her some words of wisdom on Christmas Eve, saying, “Tomorrow’s never promised.” Wanting her mother to be a part of her wedding, Menounos added, “I love you and I want you to be there.”

Finally some good news for mom! We are getting married tonight in Times Square! I will be the coldest bride ever but the happiest! Seeing my parents happy means everything! #nye #foxnewyearseve

She also took to social media to let her fans in on the big news, tweeting, “Omg! I can’t believe we are finally getting married after 20 years! Tune in to #nye on @foxtv to watch us get hitched in just a few!#coldestbridever”

Omg! I can’t believe we are finally getting married after 20 years! Tune in to #nye on @foxtv to watch us get hitched in just a few!#coldestbridever

Engaged since 2016, when Undergaro popped the question on the Howard Stern Show, Menounos and her new husband aren’t the type to rush into anything. But the wait was definitely worth it.

In the ceremony, which was officiated by none other than Steve Harvey — who admitted on air that he had been ordained only 48 hours earlier — the pair said “I do” in freezing temperatures (12 degrees, to be exact) while the bride wore a gorgeous Atelier Pronovias 2018 Collection lace gown. It might not have provided a lot of heat, but it was undeniably stunning.

“I got to spend the last 20 years with the greatest human being I have ever known. Maria, you are a blessing not just to my life, but to this whole world,” the groom told his bride during their vows. She responded in kind, saying, “You’ve loved me, you’ve cared for me, in sickness and in health. Honestly, the way you helped me and my family in these hard times, I just wanted to marry you so bad.”

This was a sentiment she also echoed in the January 2018 issue of Women’s Health. “Keven’s been my savior. He never left my side in the hospital. I was crying, ‘I just want to get married! I want to have kids!’ I’ve been pushing the wedding thing, but he said, ‘Listen, I’m working on something.’ For a minute, the type A came right back: ‘You can’t surprise me with a wedding! I need a dress!’ But he said, ‘You’re on a need-to-know basis.’ I think he really doesn’t want me to stress.”

It certainly seemed like their New Year’s Eve nuptials were stress-free and all about the happily-ever-after. Congratulations to the loving pair and their adoring family!

Have you ever been to a surprise wedding? Let us know @BritandCo!

Desiree O
Desirée O is a ‘Professional Bohemian’ who loves anything and everything related to the arts, entertainment, and pop culture. She ADORES being a ‘Newsy’ for Brit + Co, covering all of the latest tidbits of awesomeness that you want to read about. When she’s not writing, she’s either making messy art, going on long adventurous walks with her camera, or poking around over at bohemianizm (http://www.bohemianizm.com/). You can find out about Desirée O and her work at http://DesireeO.com/ or follow her on Twitter @DesireeO.
Celebrity Couples
Celebrity News
Celebrity Couples Celebrity Wedding New Years Eve
More From Celebrity News