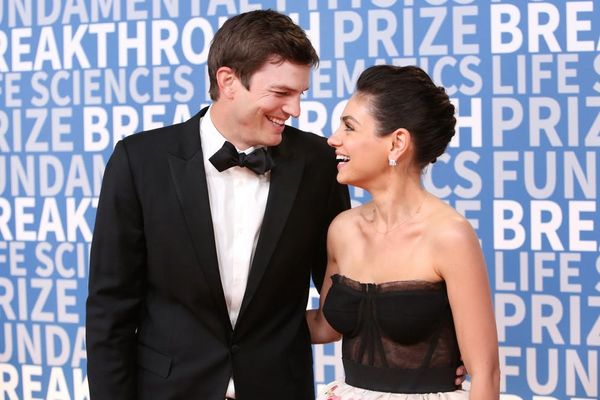 It’s the thought that counts, right? Ashton Kutcher came up with a sweet idea for a Valentine’s Day gift for Mila Kunis this year, but it turned out to be better in theory than in execution.

“I love my husband so, so, so, so much,” Kunis prefaced her story about Kutcher’s gift-gone-wrong on The Ellen DeGeneres Show on Tuesday, February 26. She went on to explain that she and the couple’s two children, four-year-old Wyatt and two-year-old Dimitri, recently became obsessed with watching some birds nesting outside their kitchen window.

“It was the most beautiful thing,” she told DeGeneres. “It was, like, a robin’s nest, and we got to see the birds being born and everything. We were fascinated with these little birds.”

That fascination gave Kutcher an idea. “So, for Valentine’s Day, Ashton got me two little lovebirds,” Kunis said.

Sweet, right? The only problem is… they aren’t actually lovebirds. “We took them to the bird lady… [and] she informed us that we, in fact, did not have lovebirds, but instead have parakeets. They’re called ‘bungies’? We have ‘bungies.'” (We’re going to assume she means budgies, a cute if common bird.)

Kunis then explained what led to Kutcher’s mistake. “He called… a Petco-like store and they were like, ‘Yes, come in. We have lovebirds.’ And so he walked in and they’re like, ‘These are lovebirds.'”

DeGeneres clarified: “They lied to him and sold him lovebirds and they were parakeets.”

Even though the birds aren’t exactly what Kutcher was looking for, Kunis seems pleased with her new pets. “So now we have [two] really beautiful little parakeets and one’s, like, teal and one’s blue,” she said. “But they’re not lovebirds, guys, because that’s not what lovebirds look like.”