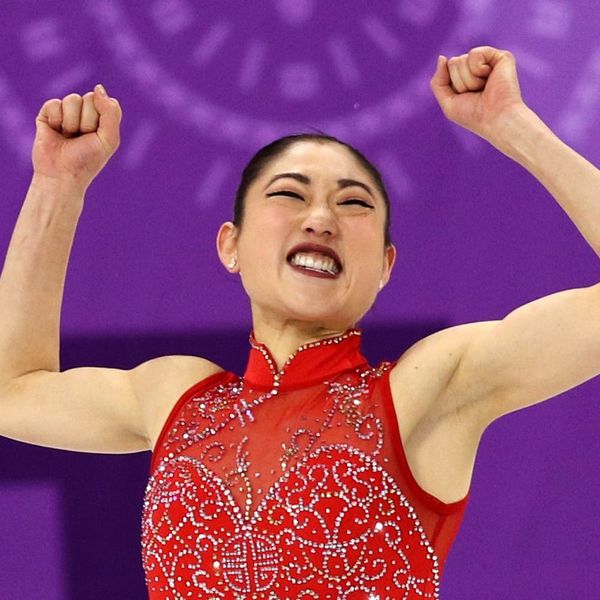 Mirai Nagasu just made history — and she made it look easy! The world-class athlete is now the first American woman to land a triple axel at the Olympics, and you have to witness this stunning feat.

24-year-old US figure skater @mirai_nagasu goes nuts after nailing a trick no American woman has ever landed in the Olympics https://t.co/J8J8yV8qSd pic.twitter.com/35daNIGLgg

The 24-year-old was the first of five women to perform in the women’s free skate during the team competition in Pyeongchang over the weekend, and she made sure she was a tough act to follow. Just 21 seconds into her routine, she jumped, spun, and twisted her way through a successful triple axel. Ah-maz-ing!

Watching Team Canada erupt into applause when American skater Mirai Nagasu became only the third woman to land a triple axel at the #Olympics almost made me tear up. pic.twitter.com/VKBg7Tnmkh

It was so incredible that even Nagasu’s competitors on Team Canada started cheering when her blade touched the ice. And once the music stopped, she threw her hands in the air with a smile that will give you ALL the feels. (She finished with an overall score of 137.53, which put her in second place and helped Team USA to a bronze medal for the figure skating team event.)

🔥ALL WORSHIP MIRAI NAGASU AND HER LEGENDARY 3A🔥 pic.twitter.com/epVSWIkQyn

Not only is Nagasu the first US woman to pull off the incredibly difficult trick at the Winter Games, but she’s also just the third woman EVER to successfully complete a triple axel at the Olympics. Japanese skaters Midori Ito and Mao Asada are the only two to have done it before her. (Two other American women, Tonya Harding and Kimmie Meissner, have landed the jump in competition, but not at the Olympics.)

After her accomplishment, Nagasu said, “[I] knew in my heart that this day would come. … This is definitely history, or herstory, whatever way you want to put it.”

We can’t wait to see who else makes herstory at the 2018 Games.

What’s your favorite sport to watch at the Olympics? Let us know @BritandCo!