This Mom Dresses Her Napping Baby in the Most Amazing Costumes 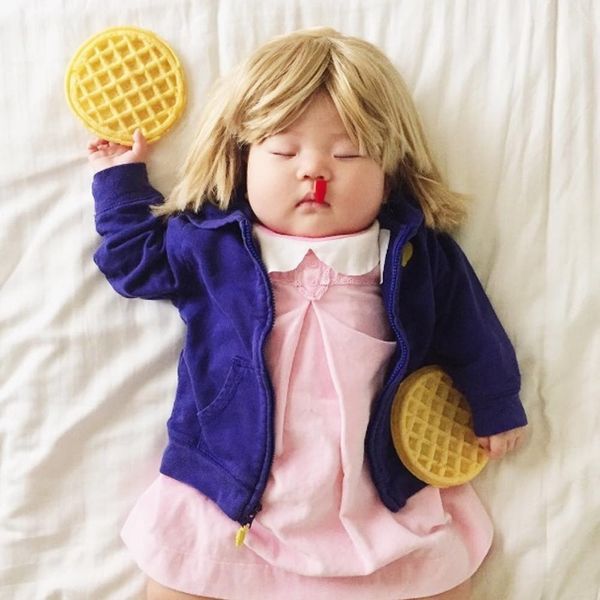 Most parents tip-toe around their sleeping babies, afraid that they will rouse a raging beast by accidentally making a sound that’s just a decibel too loud. Photographer Laura Izumikawa, on the other hand, parent to four-month-old Joey Marie, is not afraid. Not only is Joey Marie a super-sound sleeper, this adorable little one is also becoming the most popular cosplay star on the internet. The Little Mermaid, Ghostbusters, even Stranger Things — there’s nothing this duo can’t (adorably) do.

Initially dressing up her little one and taking the pics to give friends and family a little chuckle, it wasn’t long before the rest of the world took notice, especially when Laura dressed Joey Marie in an on-point Stranger Things costume, setting fans of the hit show alight with glee.

Didn't have a chandelier but I did find a wig. 👩🏼🎤#Sia

But first, there was Sia.

And, of course, Ariel, two ways.

Why can't Cinderella play soccer? Cuz she keeps running away from the ball.

🎶How do you solve a problem like Maria? #soundofmusic

And The Sound of Music’s Maria.

“Party on Wayne! Party on Garth!”

The Pokémon craze hasn’t passed this little one by.

And Furiosa, because OMG YES!

Who ya gonna call? 👻 #ghostbusters

Has the Stay Puft Marshmallow Man ever looked cuter?!

What was the most popular dance in 1776? Independance. 💃🏻 #4thofJuly

And for a patriotic note, how about some Olympic-themed fun or even the Statue of Liberty?

Behind the shot: Oh man, we love this adorable doll by @cuddleandkind! All the dolls are handcrafted by talented women artisans in Peru, providing them fair trade sustainable income, and for every doll bought, Cuddle + Kind gives 10 meals to children in need. Please check them out! | Joey fell asleep after cuddling with her mermaid but then woke up unexpectedly while I shot the ending. I just stared at her waiting for her next move but then after looking kinda confused, she flashed me a smile. Phew! What a funny kid. #cuddleandkind

Remember, though, being this adorable isn’t always easy…

What is your fave teeny baby cosplay? Tweet us @BritandCo!

Desiree O
Desirée O is a ‘Professional Bohemian’ who loves anything and everything related to the arts, entertainment, and pop culture. She ADORES being a ‘Newsy’ for Brit + Co, covering all of the latest tidbits of awesomeness that you want to read about. When she’s not writing, she’s either making messy art, going on long adventurous walks with her camera, or poking around over at bohemianizm (http://www.bohemianizm.com/). You can find out about Desirée O and her work at http://DesireeO.com/ or follow her on Twitter @DesireeO.
Parenting
Pop Culture
Parenting
More From Pop Culture