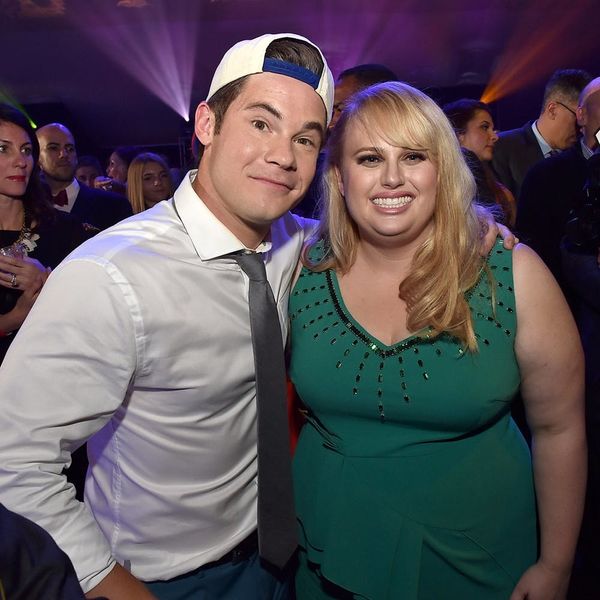 Okay, let’s be honest here, people. The MTV Movie Awards have their highs and lows (highs being Ryan Reynolds dishing about his notoriously private relationship with Blake Lively, lows being some of those WTF red carpet outfits), but arguably the biggest moment of the evening is always the “Best Kiss” award.

The competition was high this year. Would it be Trainwreck’s Amy Schumer and Bill Hader or perhaps Fifty Shades of Grey’s Dakota Johnson and Jamie Dornan? Turns out neither of those two couples’ on-screen make-out seshes were steamy enough to make the cut. This year, the Best Kiss award went to Rebel Wilson and Adam DeVine of Pitch Perfect.

As the two got up on stage to accept the coveted award a reenactment was looking unlikely. “It’s quite incredible we won this award because in real life we have absolutely no sexual chemistry,” Rebel told the audience. She went on to sarcastically dismiss his “cabbage patch face and his tight little bubble butt.” Devine then did the same, mentioning his disdain for her “pillowy lips.” And then (just in case you didn’t already realize their banter was all a joke) the two proceeded to make out… A LOT.

Up until now Ryan Gosling and Rachel McAdams’ win for their kiss in The Notebook was our most memorable MTV best kiss moment (relive that in all its romantic glory via the vid above), but this epic makeout might make us have to reconsider.

What’s been your favorite moment of the MTV Movie Awards so far? Share with us on Twitter @BritandCo.