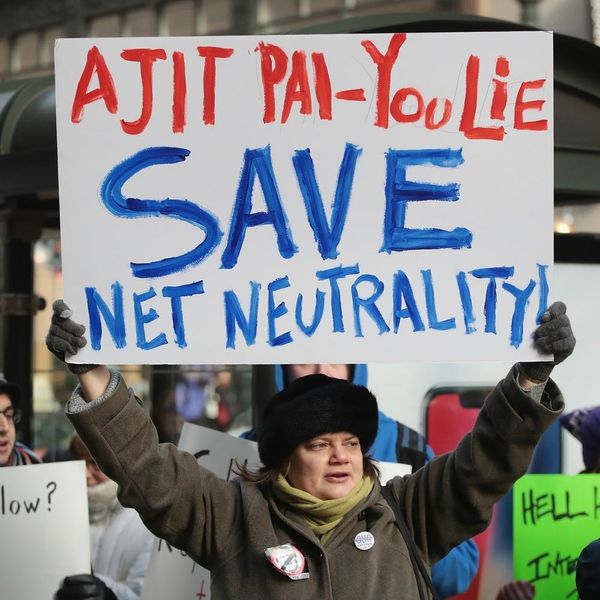 In December 2017, despite pleas from the only two women on the FCC commission to cancel their vote, the FCC voted to roll back net neutrality protections that had ensured internet service providers offer equal access to all content online (for a full rundown on what net neutrality is, click here). As of Monday, June 11, net neutrality is officially done.

With the law off the books, there are a few scenarios that could play out. All of them would negatively impact internet users and provide profit to internet service providers (ISPs). But what do these scenarios look like?

Four massive telecom corporations—Comcast, Verizon, AT&T and Charter—control 76% of broadband access, and lobbied heavily to repeal #NetNeutrality. This isn't over. We can't let giant monopolies get away with taking away our freedoms for their own profit. https://t.co/rSnOVXjqkz

At best, ISPs could break down our internet packages based on usage (Portugal has a similar system in place). If you use websites that use more data, like Netflix or Youtube, you’d pay a more premium price. This pay-for-play style system is what Vimeo boss Michael Cheah told The Guardian he believes is most likely to happen.

“ISPs probably won’t immediately begin blocking content outright, given the uproar that this would provoke,” said Cheah. “What’s more likely is a transition to a pay-for-play business model that will ultimately stifle startups and innovation, and lead to higher prices and less choice for consumers.”

Besides small businesses, this type of pricing could freeze many people out of parts of the internet they previously had access to — making the internet a place for the richest people in America, thereby making it harder for lower income or less educated people to access information that they might need.

Under this scenario, public libraries may suffer heavily. As the head of the New York Libraries wrote for The Verge yesterday, “Without the current protections, the already yawning digital divide will be widened. We know in New York City, millions of families cannot afford broadband access at home. These families are in our branches, borrowing Wi-Fi hotspots, or using our public computers to do homework, pay bills, apply for jobs, or communicate with relatives. For these New Yorkers, the 216 library branches across the city are their only option for access to technology. For the FCC to place internet access — something that in today’s world is a necessity, not a luxury — even further out of reach is appalling.”

“No matter who the [Internet Service Providers] hold up for more money, it’s all going to come back to their customers who’ll have to pay more to somebody in order to gain access to content,” Matt Wood, the policy director at the nonprofit tech policy group Free Press, told Vocativ. But there’s something even worse that could happen.

Although it may not seem terribly scary, without net neutrality, ISPs could (and probably will, to some degree) ban users from seeing certain websites while also throttling your internet browsing capabilities. For example, imagine you use Comcast as your ISP, but they are currently embroiled in a legal battle with TIME-Warner. They could block you from seeing anything online that has been created by their opponents, including news sites.

While the idea of losing some web content may not be a bad idea, the ability that people currently have to access fair and responsible news sites will definitely be damaging for end users. Imagine working for a unionized company, and going on strike. If your company is owned by a conglomerate that also owns an ISP, the corporation could block you from accessing information relevant to your strike, making it harder for those on staff to advocate for themselves.

While this seems out there, it’s not completely out of the realm of possibilities. There have been some truly scary throttling and blocking stories, including Verizon blocking pro-choice text messages from NARAL Pro-Choice to donors during a 2007 text campaign, AT&T blocking users from using Apple’s FaceTime in 2012, and Comcast putting a data cap on gamers playing their XBoxes in 2008. All of these and other violations were properly enforced by the FCC at the time, paying hefty fines for their indiscretions.

If you live in these states, you won’t feel the loss

Additionally, as of late May, attorneys general from 22 states have filed a protective petition against the FCC in the US Court of Appeals for the District of Columbia. But for now, these petitions remain under review.

Kat Armstrong
Kat has been a writer, social media maven and mom for longer than she's willing to admit. She's also spent time in front of and behind the camera, interviewing celebs, politicians and acting as a producer for fashion and artistic photography shoots. When she isn't writing for various orgs and publications, she's hanging with her kids, husband and French Bulldog, Peter, in Toronto, Canada.
Controversy
Current Events
Controversy Politics Tech News
More From Current Events