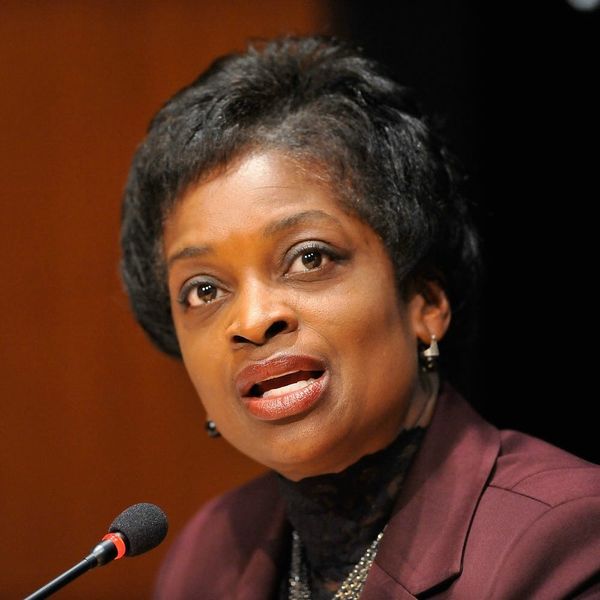 Today is a sad day in the history of the internet. Under the lead of FCC Chair Ajit Pai, Americans lost our access to a free and open internet. Republican lawmakers (like Pai, who was appointed to his role by the president earlier this year) have pushed for a net neutrality repeal, and the repeal was made official Thursday afternoon. But two women, including former acting chair and current Commissioner, Mignon L. Clyburn, and fellow Commissioner Jessica Rosenworcel, are sharing their dissent to the law ahead of the vote.

When the first FCC commissioner said “I dissent” and started going off #netneutrality pic.twitter.com/tOzSE93lHB

“I dissent, because I am among the millions who are outraged. Outraged, because the FCC pulls its own teeth, abdicating responsibility to protect the nation’s broadband consumers,” Clyburn fumed. “Why are we witnessing such an unprecedented groundswell of public support, for keeping the 2015 net neutrality protections in place? Because the public can plainly see, that a soon-to-be-toothless FCC, is handing the keys to the internet — the internet, one of the most remarkable, empowering, enabling inventions of our lifetime — over to a handful of multi-billion dollar corporations. And if past is prologue, those very same broadband internet service providers, that the majority says you should trust to do right by you, will put profits and shareholder returns above, what is best for you.”

Clyburn went on in her statement to remind her colleagues at the Commission that their jobs are to do what is best for the nation, not work toward what she believes are the demands of special interest groups and big corporations looking to do away with rules that would protect customers over profit. She also and specifically called out Pai and those who have not bothered to listen to those Americans asking them to cancel this vote.

“We have heard story after story of what net neutrality means to consumers and small businesses from places as diverse as Los Angeles’ Skid Row and Marietta, Ohio. I hold in my hand letters that plead with the FCC to keep our net neutrality rules in place, but what is striking and in keeping with the new norm, despite the millions of comments, letters, and calls received, this Order cites not even one. That speaks volumes about the direction the FCC is heading. That speaks volumes about just who is being heard.”

Clyburn finally viciously called to question whether her GOP colleagues fully understand what they are doing, knowing that their order to repeal the net neutrality law of 2015 flies in the face of the very values their office was created to uphold.

“It is abundantly clear why we see so much bad process with this item: because the fix was already in,” she said in her statement.

While many are applauding Clyburn’s impassioned plea, some are pointing out that her boss, Chairman Pai “laughed” in the face of Clyburn at the end of her statement.

Commissioner Rosenworcel, who penned a passionate op-ed for the LA Times in defense of a free and open internet, also spoke in dissent shortly before Thursday’s vote.

The @FCC voted to roll back #NetNeutality today. History will not be kind to this vote to destroy Internet openness. But this is not over. I'm not stopping here or now–and neither should you. Let's keep up the fight. Let's keep raising a ruckus. The future depends on it.

Following the vote, Commissioner Rosenworcel did not back down. “[T]his is not over,” she tweeted. “I’m not stopping here or now–and neither should you. Let’s keep up the fight. Let’s keep raising a ruckus. The future depends on it.”

Have you been following the net neutrality drama? Let us know @BritandCo!

Kat Armstrong
Kat has been a writer, social media maven and mom for longer than she's willing to admit. She's also spent time in front of and behind the camera, interviewing celebs, politicians and acting as a producer for fashion and artistic photography shoots. When she isn't writing for various orgs and publications, she's hanging with her kids, husband and French Bulldog, Peter, in Toronto, Canada.
Controversy
Empowerment
Controversy Politics Tech News
More From Empowerment