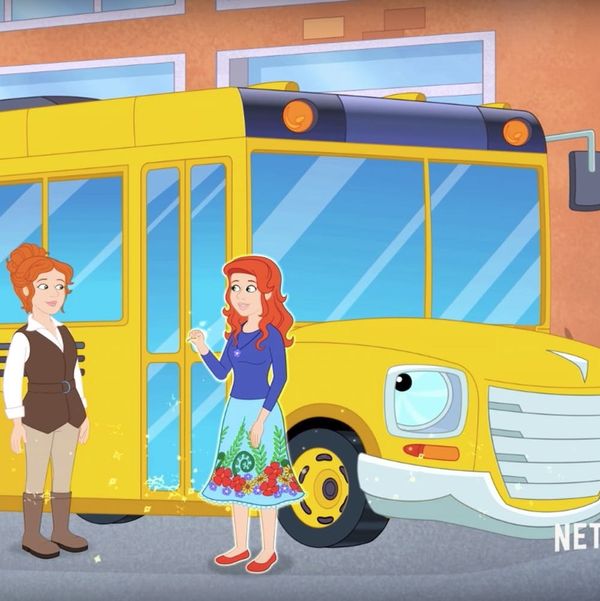 With September in full swing, the fall 2017 TV season is getting underway too, bringing a whole slate of new shows, including the Netflix reboot of the kids’ classic The Magic School Bus. This time, SNL and Ghostbusters breakout star Kate McKinnon is in the driver’s seat, taking the keys from her sister, Ms. Frizzle (the first).

The bus is magic. The science is real. pic.twitter.com/tDAniVUZnZ

As in the original series, the reboot shows Ms. Frizzle taking a group of Walkerville Elementary students on extreme educational field trips. From the looks of the trailer, they journey inside of a volcano, down to the deepest depths of the sea, and out to space. “I’m pretty sure this wasn’t on my permission slips,” one kid says as he floats down from the sky on a snowflake.

Miranda’s version of the iconic theme song is the perfect accompaniment to the adventures the kids will be having this season, which look just as wacky as ever.

With an official release date of September 29, The Magic School Bus Rides Again will be a fun introduction to the world of Ms. Frizzle for your littles or a perfect bit of Saturday morning nostalgia for you. Either way, while we wait for word on a fan-inspired Tracee Ellis Ross live-action version, this reboot will have to keep us satisfied for now.

What was your favorite show growing up? Tell us @BritandCo!

Kat Armstrong
Kat has been a writer, social media maven and mom for longer than she's willing to admit. She's also spent time in front of and behind the camera, interviewing celebs, politicians and acting as a producer for fashion and artistic photography shoots. When she isn't writing for various orgs and publications, she's hanging with her kids, husband and French Bulldog, Peter, in Toronto, Canada.
Fall TV
TV
Fall TV Netflix
More From TV