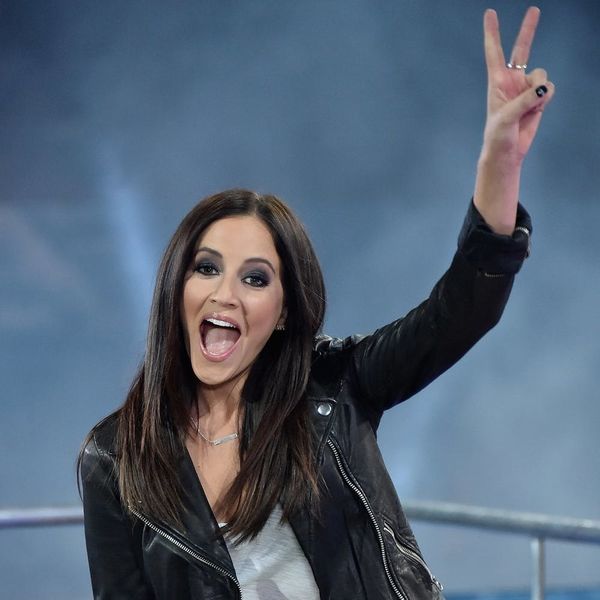 Of NFL Network’s 69 on-air broadcasters, only 15 are women. Kay Adams, the co-host of Good Morning Football, is one of them. Yet, she almost seems surprised when we ask about what it’s like to thrive in such a male-dominated field.

“I never set out to enter the industry ‘as a woman,’” the 30-something broadcaster tells us. She just knew what she wanted — “to be the best,” she says, casually — and was prepared for the hard work and sacrifice that might be involved. Gender, as far as Kay Adams is concerned, never fit into the equation.

“Sometimes you have to work twice as hard, but you’re better off for it,” she says. “If it’s what you want, make it happen.”

Adams’ nonchalance over hard work and sacrifice makes more sense when you know some of her backstory. Adams grew up the youngest of three children to Polish immigrant parents in Chicago. Her father worked in a factory for 43 years; her mother also held factory jobs. Neither parent spoke much English, and both had arrived in America without any semblance of a financial safety net. Adams is frank, and undeniably proud, of her upbringing.

“I didn’t come from much,” she explains. “Everything about work ethic, I learned from them.”

Being a daughter of immigrants was partly what steered Adams toward sports fandom in the first place. She found that following the local pro teams allowed her to connect with the culture around her. “It was the quickest way to make friends at school, to talk about the Cubs or the Bears,” she says.

It wasn’t long before Adams was hooked. She was especially particularly drawn to the storylines behind the scenes, the underdog players going against all odds to chase their dreams and persevere. As she recalls the personal impact of movies like The Sandlot and Little Giants, rag-tag sports parables that defined her ‘90s childhood, it’s hard not to imagine that Adams sees something of herself in these stories of unexpected triumph.

While her gender minority status isn’t something she likes to dwell on, Adams coyly suggests that some people have to work harder than others to get ahead in certain industries — including, one might infer, her own.

“You realize that for some people — because of things like gender or their race — credibility is just given, not earned,” she says. And, though she reports having been consistently respected by colleagues throughout her career, Adams admits that sports fans aren’t always receptive to the idea that she knows what she’s talking about, just because she’s a woman. When they send rude messages on Twitter, she does her best to ignore them.

On the whole, Adams thinks her industry’s prospects for women have improved since she started out a decade ago.“It still isn’t where it should be,” she acknowledges, “but it’s getting better.” One thing she’s noticed is that more and more women are getting hired on the basis of their experience, rather than being overlooked in favor of male candidates with fewer credentials. When a couple of young female reporters visited her set in August, she was struck by how quickly (and deservedly) they had advanced in their careers.

Another thing that’s getting better? Kay Adams’ skin, so she tells us. Since recently partnering with Olay’s #FaceAnything campaign, Adams says she’s adopted a skincare routine for the first time in her life (she gives the brand’s Daily Facials wipes a ringing endorsement, describing the cleansing towelettes as “a ShamWow for makeup” — which, truly, is quite the mental image to behold). Joining a roster of women that includes gymnast-activist Aly Raisman and YouTube sensation Lily Singh, Adams is set to walk New York Fashion Week, makeup free, for Olay later this month.

“I have a full face of makeup for three hours [on air] … and taking it off is a bit intimidating when people only see you a certain way,” she admits. But Good Morning Football fans can rest assured that there probably won’t be a full-time transition to modeling in Kay Adams’ near-future. Instead, the broadcaster tells us that her next big ambition is to get behind the camera as a producer.

“There are so many stories that go untold,” says Adams, and she wants to be the one to tell them — maybe, even, while holding open the door for younger girls with big dreams of their own.

“I want to be the woman who hires the young girl who kicks ass,” she declares. To which we say: Oh yesssss.

Are you a woman working in a male-dominated field? Tell us on Twitter @britandco!