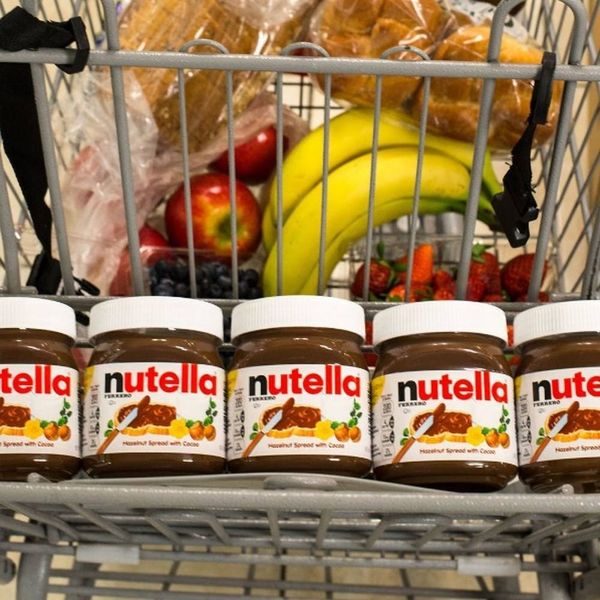 It’s pretty darn safe to say we love Nutella. We’ll take it however we can get it, from one-bite Nutella donuts to salted Nutella s’mores cake. We’ll even try Nutella pizza and Nutella burgers, proving without a doubt that it’s basically the best. That’s why it causes such grief when bad chocalety-spread-related news hits, like thieves making off with $30k worth of Nutella or the fact that now the choco-nutty treat has been linked to cancer. Folks are friggin’ devastated.

Follow your heart today. It’ll lead your cart straight to the Nutella®.

The sitch started when the European Food Safety Authority declared that foods containing palm oil could pose a cancer risk. You guessed it: Nutella contains palm oil. It’s not alone (and we’re assuming you’d have to eat a heck of a lot for it to cause any real negative health affects), but it’s the product that’s receiving the most attention since the revelation has some stores even threatening to ban it.

Nutella lovers are NOT happy…

Supermarkets wanna ban nutella, because it may cause cancer???!! Wtf 2017 i had big hopes for you!! 😭😭😭😭😭 pic.twitter.com/gludo7qcZY

Gonna go ahead and start planning my funeral bc Nutella has cancerous ingredients and I eat about a gallon a week :)

And some peeps just don’t care…

I've eaten tons & tons of #nutella in my lifetime.
More left in pantry
Give them to me if you don't want them.

Me: I hate Nutella
Scientists: Nutella can kill you
Me: pic.twitter.com/eU1rL3KGms

scientist: nutella can kill you
me: pic.twitter.com/LKPlGpJ309

Will you be giving up Nutella? Tweet us @BritandCo!