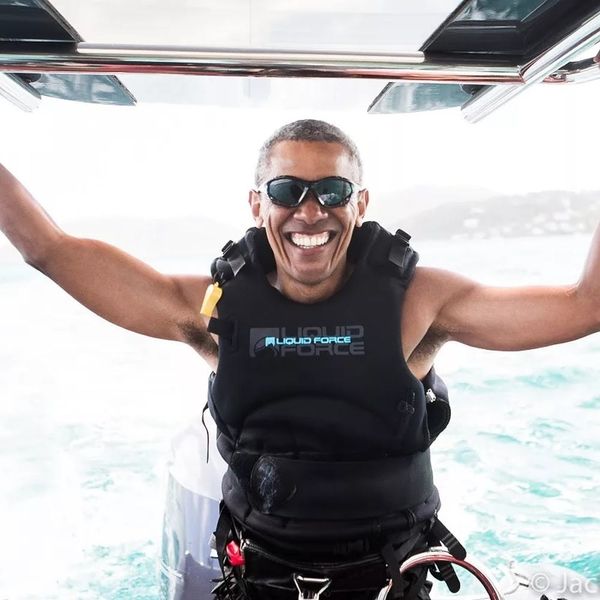 It may not have been easy for the country to say goodbye to Barack Obama as President, but the former First Family seems to be embracing his retirement with action (did you spot Malia at the Dakota Access Pipeline protest?), a surging social media account and an absolutely dreamy vacation to Richard Branson’s private island for Barack and Michelle that included an epic kiteboarding competition between the former Pres and his host. Try to guess who won!

Visiting the Virgin founder’s luxury Necker Island in the Caribbean, Richard wrote about their adventure on his blog, saying, “It was a huge honor to be able to invite President Barack and Michelle Obama down to the British Virgin Islands for a complete break after Barack finished his second term as President and the family left the White House.”

And while some folks may want to rest and recuperate after two terms in office, Obama was ready for some action. Revealing that he was unable to enjoy any of the water sports he loves while serving as president, Richard felt like this was the perfect time to “offer him the chance to learn to kitesurf.”

With the host saying that he has wanted to learn foilboard surfing, a “friendly challenge” was sparked: “Could Barack learn to kitesurf before I learned to foilboard? We agreed to have a final day battle to see who could stay up the longest.”

Who won when I challenged @barackobama to a battle of the waves? Watch the video to find out https://t.co/5hwjOvy2TK pic.twitter.com/LNdAu5gj1m

Loved offering @barackobama the chance to learn to kitesurf – here’s how he got on https://t.co/5hwjOvy2TK pic.twitter.com/jk3OEtDELq

So who won? Well, Richard admitted, “We were neck and neck until the last run on the last day, when I got up on the foilboard and screamed along for over 50 meters, three feet above the water. I was feeling very pleased with myself, only to look over and see Barack go 100 meters on his kiteboard! I had to doff my cap to him and celebrate his victory.”

Is this how you expected Obama to spend the first bit of his retirement from the White House? Tweet us @BritandCo!