On Behalf of Halloween Haters Everywhere 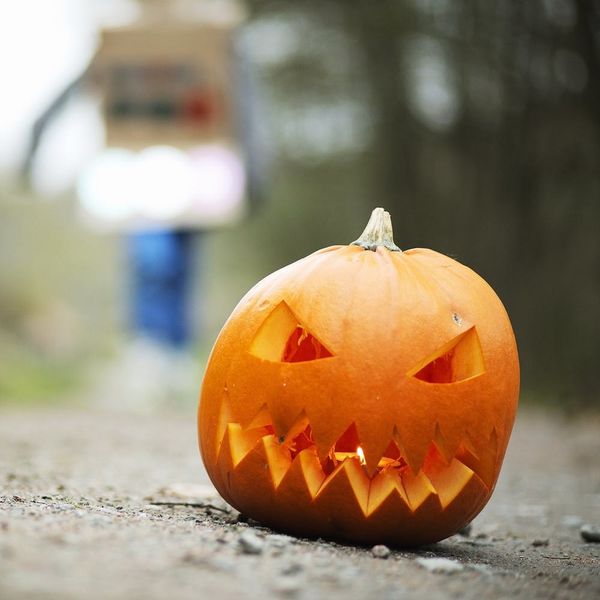 Once a year, I suddenly become very unpopular.

I can always sense the shift coming before it happens. The people around me break out their boots and sweaters. Starbucks starts advertising the PSL again. My Instagram feed is chock-full of images of maple-scented Yankee candles and adorable couples hanging out at the pumpkin patch. The local pharmacy moves bulk bags of candy to the front of the store. These are all signs that I’m about to become persona non grata — despite the fact that I love boots, sweaters, Starbucks seasonal beverages, maple candles, pumpkin patches, and candy. Actually, I really love candy.

The truth is, though, that I also really hate Halloween. And every year as the holiday approaches, I find myself sinking further into that reality, hiding my dislike from revelers deeper and deeper like it’s a giant chocolate bar sitting at the bottom of one of those big plastic chests that your neighbor uses to dispense candy on trick-or-treat night. The older I get, the more I realize how much most people really love Halloween, and my own distaste for it increasingly becomes an anomaly, a fun party trick I can break out any time I need a “fun fact” about myself between the months of August and November. Still, in my heart of hearts, I’m only slightly ashamed of the fact that I’m not a Halloween enthusiast (even though I pretend to be extremely embarrassed by it when defending myself against hardcore celebrators).

It was never in the cards for me to love Halloween. Neither of my parents is big on the holiday. During my elementary school years, I lived in a neighborhood that was populated largely by elderly families who pretended not to be home on Halloween. Said neighborhood was also outside the bounds of my school district — a story for another day — so the few kids who did trick-or-treat on my block were strangers to me. My mom accompanied me once or twice as I went door to door looking for candy, but our hearts weren’t in it… and there was little candy to be found. I watched glumly as kids I’d never met went running across the cul de sac together, full pillowcases dragging behind them. Mom and I looked at each other and knew it was time to go home and eat whatever chocolate bars we’d managed to collect.

My relationship with Halloween improved slightly in the second half of elementary school. My best friend at the time loved the holiday. Even in those younger years, she possessed the special brand of creativity that ensured she always had the coolest costume in the school Halloween parade. She also lived in the biggest neighborhood around, the kind of subdivision that was rife with young families who decorated their front porches and handed out ample goodies to trick-or-treaters. Spending Halloween with this friend changed my mind a bit. I no longer had to trick-or-treat through an empty neighborhood with only my mom as company (sorry, Mom), and I suddenly had a reason to step up my costume game. In sixth grade, I decided to dress up as a rabbit jumping out of a hat. My dad built a giant top hat out of a hula hoop and cardboard box, and we hung it from my shoulders with duct tape straps. This was, by far, the peak of my Halloween experience.

Shortly after this triumphant Halloween, my family moved to a new town, and my fledgling positive feelings toward October 31 were thwarted. It’s hard to be the new kid, well, always, but it’s especially difficult as a tween. Add costumes and the pressure to break into groups for an all-important annual event like trick-or-treating, and it’s all downhill from there.

I share this story not to solicit sympathy for my personal experience, but as a gentle reminder that, like any other major event on the calendar, Halloween can often be tied to unique memories from childhood that evoke positive or negative memories. I take a lot of heat for my anti-Halloween leanings, but I promise that I’m not just trying to play the October Grinch. The holiday just wasn’t a big occasion in my family. By the time it did become something I enjoyed, it wasn’t long before it was a reminder of a difficult transition that I (like so many other kids) weathered at a tough age. Because of this, I would much rather celebrate the fall season — boots! sweaters! pumpkin spice! candy! — without the costumes and skeletons.

When I reveal to a Halloween enthusiast that I’m not a fan of the holiday, they often assume that, when I do have my own children someday, I plan to force them not to participate. Nothing could be further from the truth! So much of my own distaste for the occasion comes from my own parents’ ambivalence about it, and since I got a glimpse of how fun October 31 can be in those later elementary school years, I’m totally open to breaking the cycle with my kids. This coming Halloween will be my first as a dog owner, and my pup will most definitely be wearing a costume. I’m not trying to ruin the holiday for anyone else or to somehow put an end to it through the generations in my own family. It’s just not a holiday that I personally have found great joy in over the years, and I don’t think I should have to feel embarrassed about it, no matter how big of a deal it is for others.

Halloween lovers, I know how closely you hold your own October traditions, and I know how jarring it must be for you to learn that others don’t share your passion for the holiday. On behalf of all of us who aren’t obsessed with it, I ask that you respect our feelings and resist the urge to make us feel like terrible, boring people because of them. You never know where those feelings might be coming from!

Plus, we never said we didn’t like candy or that we couldn’t appreciate the hilarity of a puppy wearing a Halloween costume…

Do you love Halloween or love to hate it? Tweet us @BritandCo.

Alli Hoff Kosik
Alli Hoff Kosik is a freelance writer who is passionate about reading, running, rainbow sprinkles, her lipstick collection, watching embarrassing reality TV, and drinking pink wine. She lives in Brooklyn with her husband and (in her dreams, at least) three golden retriever puppies. Listen to her talk books on The SSR Podcast.
Adulting
Creativity
Adulting Halloween