13 Pantone-Approved Travel Destinations to Visit in 2018 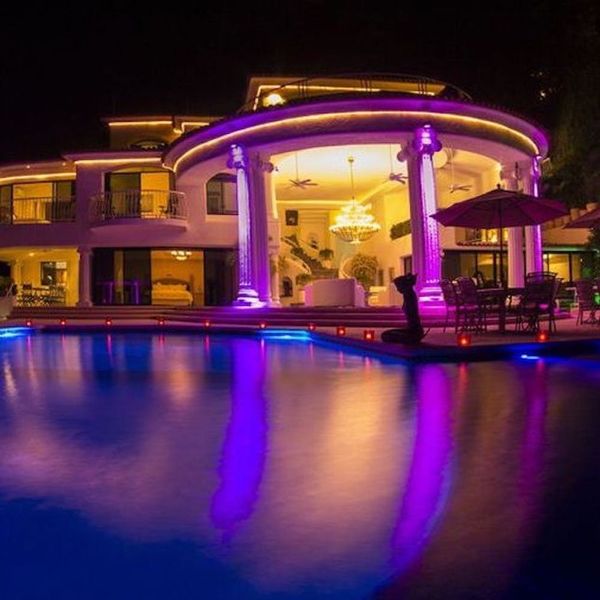 With the announcement of its 2018's color of the year, Pantone has us seeing Ultra Violet in all kinds of ways, from plum-inspired home decor to lavender products galore. If the bold hue isn’t exactly in your home’s color wheelhouse, however, not to fret: You can still enjoy the royal shade without forever committing to it with your walls, carpet, or even furniture. Instead, simply check out these 13 travel destinations that feature the shade as a focal point. Scroll through to see your most colorful options right now!
Party Villa, Serbia (Roughly $425 per night): The focal-point of this two-story contemporary villa has got to be its indoor, heated pool, which is awash in a sea of plum at all times thanks to its royal purple walls and coordinating lights (though the rest of the four-bed, three-bath property isn’t half bad, either!). (Photo via HomeAway)
Various cities, YOTEL (Prices vary): Just about everything in this hotel is purple, from the suites and lobbies to its entertainment rooms and terrace. In addition to being right on trend when it comes to its color scheme, however, it's also on the cutting edge of technology, boasting adjustable SmartBeds, keyless entry, monsoon showers with heated towel racks, Smart TVs, and even — get this —luggage-sorting robots. Wowza! (Photo via YOTEL)
Atlantica So White Club Resort, Ayia Napa, Cyprus (Prices vary): By day, this all-inclusive gem in the Mediterranean lives up to its name, thanks to its all-white exterior, stark rooms, and even a pool void of color. By night, however, it comes alive with purple “mood-enhancing lights” that illuminate its blank canvas walls. (Photo via Atlantica So White Club Resort)
Lepage House, Esplanade Ridge, New Orleans, Louisiana (Roughly $684 per night): This 2,000-square-foot luxury apartment is the perfect space to rent with your pals. Its five-bedroom, four-bath layout also features a two-tier balcony area that allows you to bask in the purple glow of its LED-lit exterior. (Photo via HomeAway)
Sanderson Hotel, London (Prices vary): There’s an entire bar dedicated to the Pantone 2018 color of the year at the Sanderson hotel in London. Aptly dubbed (what else?!) Purple Bar, this dramatic lounge, where you can sip on high-end cocktails (or better yet, learn to make them), is an amethyst-lover’s dream come. Violet silk curtains, Queen Anne chairs of lavender, and purple etched Venetian mirrors all help to account for the monochromatic decor, which is more than Insta-worthy. We’ll drink to that! (Photo via Sanderson London)
Hotel Le Marais, New Orleans, Louisiana (Roughly $2,350 per night): Whether it’s in the form of a purposely placed pillow, an outdoor seat cushion, or an obvious blast of lights, touches of lilac can be found everywhere throughout this purple haven smack dab in the middle of the French Quarter. The overall affect is a soothing one that makes what is sure to be an already enjoyable stay at a four-star venue a cut above. (Photo via Hotel Marais)
Château, Thuret, France (roughly $2,350 per night): Just in case you felt like living like the movie star life, this five-star Château, which boasts a lavender-lit façade and no less than 29,062 square feet of space, is available with every creature comfort you could ever want for — it even has its own putting green! The interior itself is even more magical, with sculptures, painted ceilings, and elegant chandeliers — anyone want to go in on a group vacation? (Photo via HomeAway)
Grand Hotel Kempinski, Geneva, Sweden: (Prices vary): The modern FloorTwo Bar overlooking the lake becomes a plum haven after its lights begin to dim, adding a touch of modern decor to the Grand Hotel Kempinski in Geneva, Sweden, which also houses the largest suite in Europe, according to the site. From the looks of things, it’s the perfect place to relax after checking out the property’s amenities, which include a theatre, spa, and fitness center too. (Photo via Grand Hotel Kempinski Geneva)
Oasis, Canyon Gate, Las Vegas, Nevada (Roughly $150 per night): Fans of our new fave hue will be dying to play pool in this oasis billiards room, where you can choose your LED color of choice. There’s also a backyard pool with a Tahiti-style waterfall, a four-hole putting green, and enough room to comfortably sleep up to 13 of your friends for a month-stay (there’s a 31-day minimum). (Photo via HomeAway)
Radisson, Plaza Hotel at Kalamazoo Center, Kalamazoo, Michigan: (Prices vary): You won’t have to go far to get your purple fix in this President’s Award-winning hotel — which has everything from its own Starbucks to a Whirlpool Suite with a giant Whirlpool tub — the pleasant hue is ready and waiting to greet you in the lobby. (Photo via Radisson Plaza Hotel at Kalamazoo Center)
Las Brisas, Acapulco, Mexico: (Roughly $1,763 per night): Said to have “impressed celebrities and athletes” alike with its bay and ocean-views, private beach cove, massage room, and Tiki bar, we’d take this seven-bed, seven-bath villa mansion regardless of its color-scheme, but the fact that it's purple (even its WATERS are tinged with the violet hue) makes it even more covetable. Oh, and did we mention it comes with a full staff of cooks and housekeepers? (Photo via HomeAway)
Conrad Hotel, New York City: (Prices vary): A little purple oasis exists right in the heart of Lower Manhattan in the form of Conrad New York's Loopy Doopy rooftop bar and 15-story meeting space, both of which feature nods to the trending shade and can be enjoyed at virtually any time of night — the meeting rooms and gym never close! (Photo via Conrad Hotel)
Purple suite, Bengaluru, Karnataka, India ($43/night): For just $43 a night (!), you can rent this Pantone-approved suite in the Amber Inn bed and breakfast in Bengaluru, Karataka, India. There’s a continental breakfast which you can enjoy from a terrace garden and, according to its five-star reviews, a warm and friendly staff besides. (Photo via Airbnb)

Nicole Briese
Nicole is the weekend editor for Brit + Co who loves bringing you all the latest buzz. When she's not busy typing away into the wee hours, you can usually find her canoodling with her fur babies, rooting around in a bookstore, or rocking out at a concert of some sort (Guns N' Roses forever!). Check out all her latest musings and past work at nicolebjean.com.
Color
Travel
Color Travel vacation