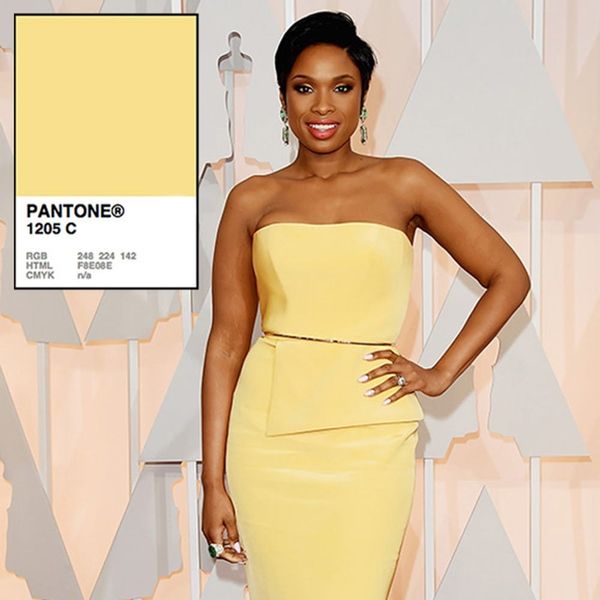 Striking shades of white dresses, elegant neutrals and fiery reds dominated the red carpet for the 87th Academy Awards. And while this year’s offerings were a little more muted than in the past, we still spotted plenty of striking, colorful ensembles. We’re sharing some of our favorite looks of the night and their Pantone partners, so you can work some of the best red carpet styles into your wardrobe as well as your home.

1. Rosamunde Pike in Pantone 1795: Between her gown’s attention-grabbing slit, stylishly cinched waist and red hot color, Rosamunde Pike made sure all eyes stayed on her. (Photo via Jason Merritt/Getty)

4. Scarlett Johannson in Pantone 3302: We love that ScarJo went for a rich green hue for her curve-hugging frock in lieu of something a little more loud or sexy. The elegant, muted color felt fresh, sophisticated and totally unexpected. (Photo via Jason Merritt/Getty)

6. Jennifer Hudson in Pantone 1205: White, red and neutrals might have ruled the red carpet, but Jennifer Hudson opted for pretty, playful yellow that stood out from the crowd. The sunny hue introduced a youthful, fun touch to her stunning Ramona Keveza gown. (Photo via Jason Merritt/Getty)

12. Jennifer Lopez in Pantone 487: We can go ahead and add this to JLo’s best dressed moments list. Her whimsical rose gold dress by Elie Saab Haute Couture was jaw-droppingly gorgeous with its flowing tulle skirt, beautiful beadwork and plunging neckline. (Photo via Jason Merritt/Getty)

14. Emma Stone in Pantone 127: Emma Stone’s Academy Awards style channeled the award itself, with the Birdman actress walking the red carpet in a glitzy gold number and metallic shoes. (Photo via Jason Merritt/Getty)

What was your favorite look of the night? Tell us in the comments!

Libby MacCarthy
Libby MacCarthy is an urban planner turned writer with a love (bordering on unhealthy obsession) of all things fashion and beauty related. She lives for perfectly brewed coffee, farmer's markets, dinner parties and perusing impeccably designed boutiques. When she's not on the hunt for the latest trends, you'll likely find her plotting her next adventure or nose deep in a book. Libby currently splits her time between the East Coast and her adopted home of France. Follow her daily adventures on Instagram.
Celebrity Style
Trends and Inspo
Celebrity Style Gwyneth Paltrow Oscars pantone Red Carpet
More From Trends and Inspo