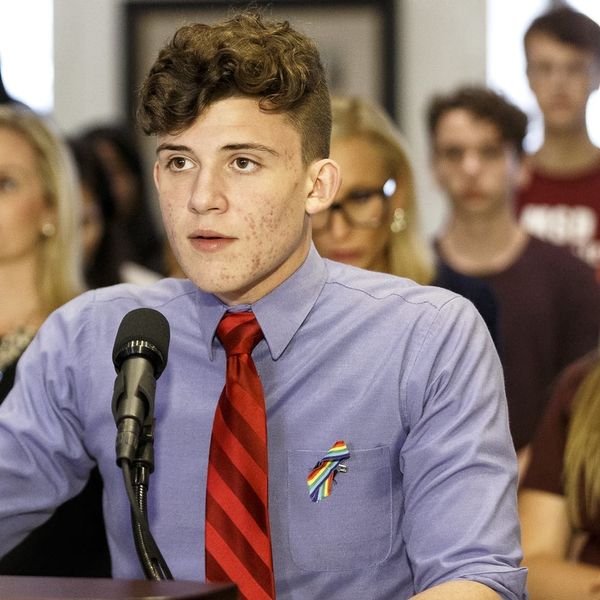 You’re either with them or against them.

That is the message that was clearly articulated by survivors of the shooting at Marjory Stoneman Douglas High School during a heated two-hour Town Hall hosted by CNN last night in Broward County, FL. Students, along with friends and family of those killed, spoke face-to-face with Florida legislators and confronted them about gun control and the urgency of making schools safer in the United States.

The real showdown happened as Sen. Marco Rubio (R-FL) and National Rifle Association (NRA) Dana Loesch exchanged words with outraged family members of those that were among the 17 killed in last week’s mass shooting.

Fred Guttenberg, father of 14-year-old Jaime Guttenberg who was shot and killed by Nikolas Cruz at Marjory Stoneman, was one of the first speakers in the 7,000 seat arena to forcefully address Rubio about his stance on gun issues.

“Your comments this week and those of our president have been pathetically weak,” Guttenberg said to thunderous applause. “You and I are now eye to eye. Because I want to like you, look at me and tell me that guns were the factor in the hunting of our kids in this school this week. And look at me and tell me you accept it and you will work with us to do something about guns.”

Rubio took a moment to respond to Guttenberg as the audience continued to drown him out.

“Absolutely, of course they were,” Rubio replied to Guttenberg. “I absolutely believe that in this country if you are 18 years of age you should not be able to buy a rifle. I will support the banning of bump stocks. I will support changing our background system.”

Rubio — who isn’t known for making coherent speeches — was actually very well-spoken throughout the evening and was able to discuss the complexities of gun laws, and gave a breakdown of how guns are constructed which is why he argued that it’s difficult to ban assault rifles. However, his words were no match when confronted with his NRA donations.

Student Cameron Kasky — one of the most vocal leaders of the Never Again movement that generated from the shooting in Parkland — asked him point blank about the millions in campaign donations he receives from the NRA.

“Senator Rubio, can you tell me right now that you will not accept a single donation from the NRA in the future?” Kasky asked.

“So number one, the positions I hold on these issues of the Second Amendment — I’ve held since the day entered office in the city of West Miami as an elected official,” Rubio began, “Number two — no. The answer to the question is that people buy into my agenda. And I do support the Second Amendment. And I also support the right of you and everyone here to be able to go to school and be safe.”

Kasky soon cut him off and asked once again: “No more — no more NRA money?”

Rubio responded by saying that people “buy” into his agenda, meaning, people who contribute to his campaign agree with what he stands for, not the other way around. He added by saying the NRA is “the influence … from the millions of people that agree with the agenda.”

The NRA’s Dana Loesch took the stand, so to speak, along with Broward County Sheriff Scott Israel, during the second portion of the Town Hall. Surprisingly, Sheriff Israel directly said he is 100 percent supportive of the Never Again movement and demanded gun control from lawmakers and the NRA — an extremely rare position for law enforcement to take.

The Broward County Sherrif, Scott Israel, who is Sheriff in my home county, may have just moved the debate twenty more yards by virtue of his position. Incredible. 🙌👏👏👏

He added that the only way to make a change to gun laws is to vote for candidates who feel the same way you do.