Start Your Morning Off With These 12 Porridge Upgrades 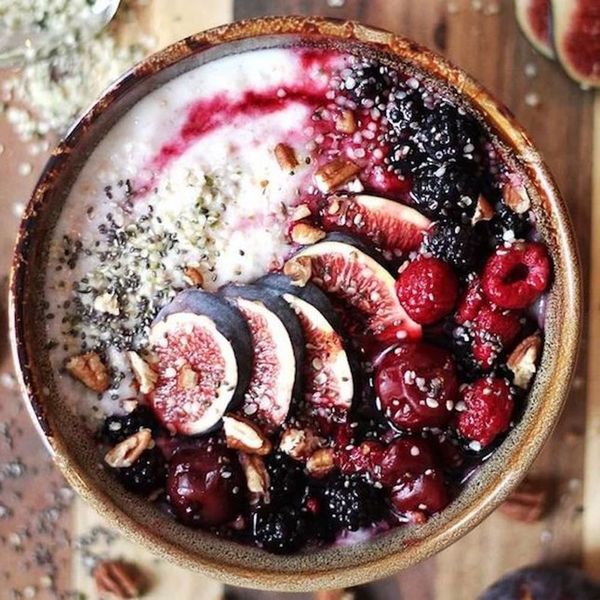 If you’ve been on Insta lately, you know that bowls of grainy goodness are all the rage. With the weather turning cooler, a hot bowl of porridge (complete with all of the fixin’s) strikes the perfect balance between hearty, hygge, and healthy. If you feel stuck in an oatmeal and raisin rut, there are plenty of delicious recipes floating around the internet to inspire you. We’ve pulled together a few of our favorites that might be just what you need to pull you out of bed in the morning.

1. Breakfast Quinoa With Chai-Spiced Almond Milk and Cinnamon: Like your favorite morning cuppa chai, but even more fulfilling. This bowl is a great option for vegans, and still high in protein. (via Well and Full)

2. Strawberry Polenta Breakfast Bowl: We’ve never considered polenta for breakfast, but this has us giving it a second thought. It’s topped with a gorgeous strawberry compote that perfectly complements the flavor of the cornmeal. (via The Almond Eater)

3. Amaranth Porridge With Roasted Pears: Amaranth is a high-protein grain that’s been steadily gaining in popularity. Give it a spin with this cozy recipe. It’s laced with plenty of fall spices and topped with yogurt for extra oomph. (via Naturally Ella)

4. Brown Rice Porridge With Figs and Blueberries: If you love rice pudding, you’ll be all over this recipe. Swap out figs and blueberries for dried fruit or segmented citrus in the winter. (via Kitchen Sanctuary)

5. Chocolate Peanut Butter Oatmeal: For those with a morning sweet tooth, cocoa powder gets mixed into the oatmeal for a super chocolate-y base. It’s basically an excuse to eat peanut butter cups for breakfast, and we don’t hate that. (via Bakerita)

6. Farro Breakfast Bowl With Cinnamon Apples: Farro is a super satisfying grain that, when cooked properly, retains a nice toothsome bite. This bowl is sweetened with honey, chock full of apples and cranberries, and topped with a crunchy quinoa and pecans. (via Foolproof Living)

7. Tahini Porridge: This recipe comes together in a snap, with only five pantry ingredients and five minutes on the stove. Plus, it’s super flavorful. Consider it the most bang for that morning buck. (via Recipes from a Pantry)

8. Coconut Chia Oats With Caramelized Bananas: If you like your porridge loaded, check out this recipe. There’s a method for caramelized bananas, plus tons of other topping suggestions like bee pollen, crushed roses, chia seeds, and even, yes, CHOCOLATE. (via Half Baked Harvest)

9. Raw Buckwheat Porridge With Nectarines and Raw Cacao: This recipe is perfect for those mornings when you’re short on time. Soak the grains overnight in water, and throw them in the blender the next morning with nut milk until creamy and smooth. (via Tuulia)

10. Creamy Coconut Millet Porridge: For a new spin on a classic, try making porridge with millet. This version, topped with chocolate shards and nuts, tastes creamy, cozy, and indulgent. (via Cook Republic)

11. Raw Sprouted Buckwheat Porridge With Figs and Cacao Nibs: Sprouting grains before cooking them helps activate the nutrients and break down starch inside the seed, making them easier to digest. This recipe for sprouted buckwheat is a great starting point if you want to give it a try. (via Dagmar’s Kitchen)

12. Red Berry and Barley Porridge: For a bowl that’s as pretty as it is tasty, look no further than this barley porridge. The best part? It uses frozen berries, so you can enjoy it all through the winter. (via Two Spoons)

Jessica Smith
Jessica is a blogger and professional pastry cook in San Francisco. When not whipping up desserts, you can usually find her tackling DIY projects with her husband, entertaining for a crowd, or running around the neighborhood with her rambunctious puppy, Rebel. Jessica believes in using seasonal and wholesome ingredients as much as possible and you can check out more of her recipes at her blog: By Guess And By Golly.
Breakfast Recipes
Recipes
Breakfast Recipes recipe roundup
The Conversation
More From Recipes