Eating Sugar During Pregnancy Could be Linked to Asthma in Children 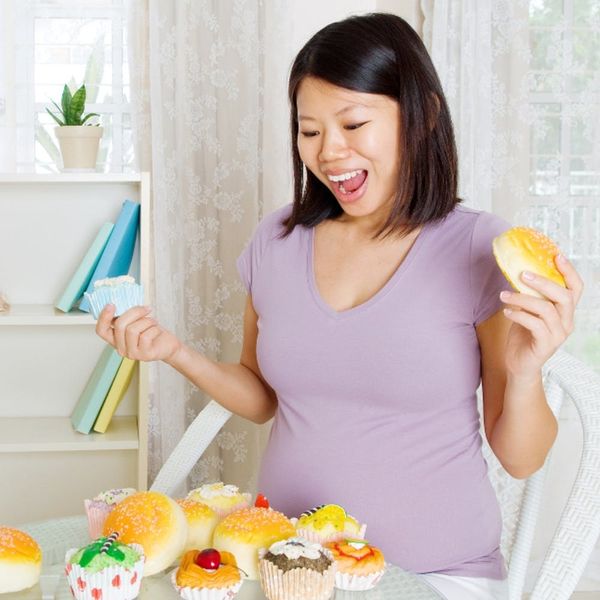 Hey Mama, you’ve got some major pregnancy cravings going on. You’re all about chocolate, peanut butter, marshmallow cream sandwiches, and salted caramel ice cream with grape jelly drizzled on top. Yeah, your pregnancy faves are high-sugar, not-so-healthy snacks. But isn’t that what the baby wants? Not so much. Aside from contributing to a generally unhealthy diet, eating too much sugar during pregnancy may double the chance that your child will someday develop asthma. We’ve got the lowdown on the new research behind this possible (and scary) connection.

Researchers from the Queen Mary University of London looked at data from almost 9,000 mother-child pairs, thinking that they might just find some sort of connection between respiratory issues and maternal sugar intake during pregnancy. The participant pairs were all part of the Avon Longitudinal Study of Parents and Children, AKA the “Children of the ’90s” study (the mamas who volunteered for the study were pregnant in the ’90s, and their children have been followed ever since).

There isn’t a tremendous amount of research existing on the subject. Actually, there isn’t very much at all. Most of it focuses on what the kids are eating and drinking and the development of asthma. So these researchers from across the pond decided to help women everywhere by investigating whether too much sugar during pregnancy has anything to do with the child later developing asthma or allergies. The study compares the top 20 percent of sugar eaters (the moms who had at least five teaspoons-worth of sugar per day) with the bottom 20 percent, and which children developed respiratory issues.

The mothers who had the highest sugar intake of the group also had children who were more likely to have allergies and an allergic asthma diagnosis.

Right now, the scientists don’t have a 100 percent definitive cause for this connection. They believe it might have something to do with the maternal fructose intake causing some sort of postpartum allergic immune response that leads to allergic inflammation in the child’s developing lungs. Or, in other words, eating too much sugar could be kicking the baby’s immune system into overdrive in a way that doesn’t start showing up until after they’re born.

Here’s the thing — the study didn’t find a connection between high sugar intake and all types of asthma. No, there isn’t just one “asthma” diagnosis out there. The symptoms all include inflammation of the airways, but there are people who have exercised-induced asthma, occupational asthma, childhood asthma, and allergic asthma. It’s this last one, allergic asthma, that seems to be the culprit here.

The connection between pregnancy-related sugar intake and all types of asthma wasn’t exactly strong. Even so, the link between the sugar intake and only developing allergic asthma was fairly high. Maybe that’s an understatement: The findings showed a 101 percent increased risk of developing the allergic type. Along with the increased risk for being diagnosed with allergic asthma by age seven, the researchers also found a 38 percent higher risk for developing allergies in general.

If you’re wondering, “Couldn’t something else have increased the risk for these kids?” Well, yeah. After controlling for mom’s background characteristics, social factors, and other maternal diet issues, the results weren’t any different. That may mean it’s the sugar at fault. Keep in mind, though, that’s a “may” and not a total, complete, absolute “yes.”

Oh, and the researchers also looked at what the kids (after birth) were eating. Past research has focused on this area, looking at children’s sugar intake and the development of asthma. This study found no connection between the two.

When it comes down to it, sugar is fine for a treat here and there. But downing gummy worms, cupcakes, and pixie sticks just isn’t healthy — whether you’re preggo or not.

Are you making changes to how you’re eating during pregnancy? Tweet us your thoughts @BritandCo!

Erica Loop
Erica Loop is a freelance writer living in Pittsburgh. When she's not busy creating kids' activities for her blog Mini Monets and Mommies, you can find her trying to hang out with her teenage son, being chased by her two Olde Boston Bulldogs or teaching a children's karate class (she's a third degree black belt!).
Healthy Living
Pregnancy
Healthy Living maternity Pregnancy study Womens Health
More From Pregnancy