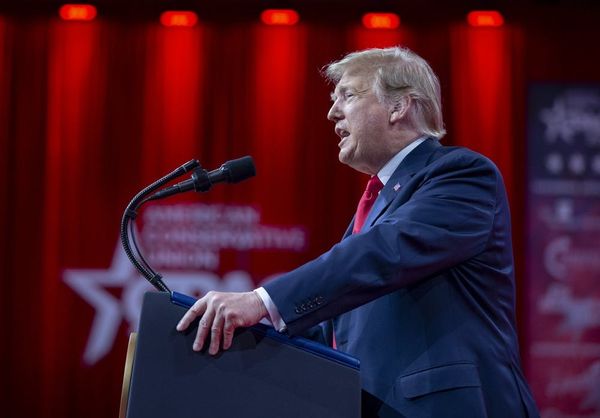 More than a year after several white supremacist and alt-right figures including Richard Spencer and Milo Yiannopoulos canceled their college speaking tours, President Trump is promising to protect “free speech” on college campuses. According to the Associated Press, the president said over the weekend that he will sign an executive order addressing (unfounded) right-wing concerns over the censorship of conservative voices on college campuses, including known far-right speakers such as Spencer, Yiannopoulos, and author Charles Murray.

Trump first spoke publicly about this executive order on Saturday, March 2, in his two-hour speech at the annual Conservative Political Action Conference. Per the AP, he did not go into detail about what the order might say, except that colleges and universities would be required to support free speech if they want federal aid.

As with virtually every policy from Trump’s White House, news of this executive order has raised concerns among progressive free speech and civil rights advocates. Some critics question how the administration will enforce the order, and what it will mean to allow the government to “police” free speech discussions, especially on private campuses, which have rights of their own. Others, like Peter McPherson, president of the Association of Public and Land-Grant Universities, have noted that public universities are already beholden to the First Amendment. McPherson told the AP that an executive order protecting conservative speech on campus is “unnecessary,” as the First Amendment is “core” to the mission of public universities.

In fact, appeals to the First Amendment secured Spencer events at public universities including the University of Southern Florida, where one of Spencer’s fans shot into a crowd of leftist and liberal student and community protesters following his 2017 talk at the school. The shooter, Tyler Tenbrink, did not hit anyone when he fired his gun, and recently pled no contest to a charge of aggravated assault with a deadly weapon.

In speaking about his plan over the weekend, Trump brought up Hayden Williams, who was punched at the University of California, Berkeley, in February while recruiting for the conservative group Talking Points USA. According to the AP, Williams told the CPAC crowd that conservative students face “discrimination, harassment, or worse if they dare speak up on campus.” It’s a common claim, but data analysis from Georgetown’s Free Speech Project, as reported by Vox last August, found little evidence to support it.

Elizabeth King
Elizabeth King is a politics, history, and culture writer based in the Twin Cities. She is generally pretty cranky but still enjoys traveling, music from the early 2000's, and plotting the resistance. Feel free to say hi on Twitter at @ekingc or check out some of her work at www.elizabethcking.com.
Politics
Current Events
Politics