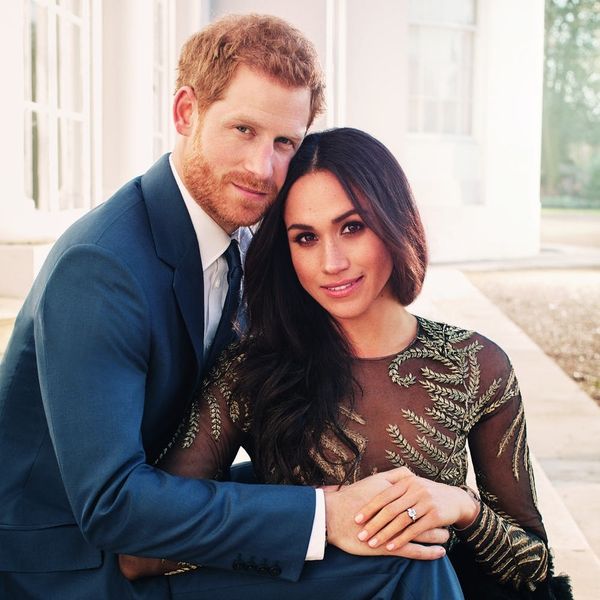 Hours after Prince Harry and Meghan Markle announced their engagement last month, the pair stepped out for their first official photo op together. Lucky for us, it wasn’t the last: The happy couple just unveiled their official engagement portraits, and they’re absolutely stunning.

In the first photo, the couple sit on a set of stairs as Markle leans on Harry’s leg while expertly showing off her beautiful — and sentimental — ring. The former Suits actress looks stunning in a black embellished gown, while Harry looks dapper in his blue suit.

A second, much less formal photo in black and white shows the couple sharing a hug and cuddling close together, laughing and looking so happy. It even looks like Harry is wrapping his jacket around his bride-to-be, who is wearing a cozy-looking white sweater. Oh, young love!

“A huge thank you to His Royal Highness Prince Harry and Ms. Markle, for allowing me to take their official engagement portraits,” Lubomirski wrote on Instagram. “Not only was it an incredible honour, but also an immense privilege to be invited to share and be a witness to this young couple’s love for each other. I cannot help but smile when I look at the photos that we took.” Us too!

Shortly after releasing the two official portraits, Kensington Palace shared another photo, a candid glimpse at the affectionate pair as they walked arm-in-arm, smiling and putting their more formal wardrobe picks from the first picture on full display.

“Thank you so much for all of the wonderful comments following the release of Prince Harry and Ms. Meghan Markle’s engagement photographs,” the Palace shared. “The couple are so grateful for the warm and generous messages they have received during such a happy time in their lives. As a way to say thank you, they have decided to share this candid photograph from the day of their portrait sittings directly with all of you.”

Thank you so much for all of the wonderful comments following the release of Prince Harry and Ms. Meghan Markle's engagement photographs. The couple are so grateful for the warm and generous messages they have received during such a happy time in their lives. As a way to say thank you, they have decided to share this candid photograph from the day of their portrait sittings directly with all of you.

Harry and Markle will wed on Saturday, May 19, 2018 at at St. George’s Chapel, Windsor Castle.

What do you think of Harry and Meghan’s engagement pics? Let us know @BritandCo!