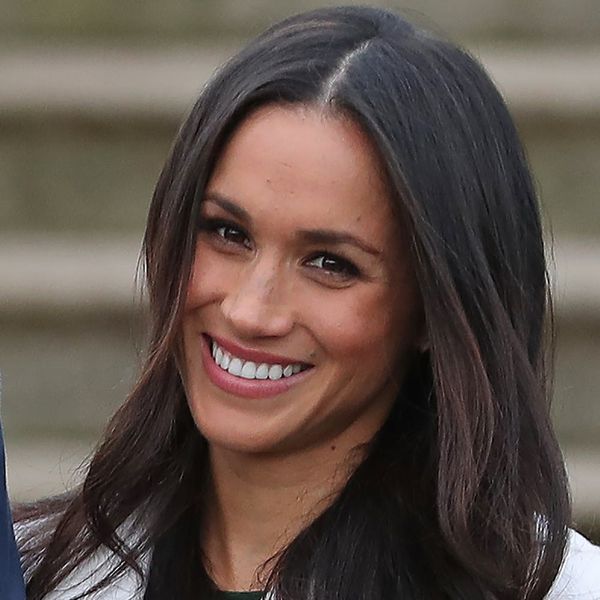 Your first glimpse at newly engaged royal couple Prince Harry and Meghan Markle has arrived! After surprising the world this morning with their big wedding news, the duo stepped out for their first post-engagement appearance, and it’s everything we could have hoped for. While they undoubtedly looked happy and in love, they also looked plenty chic, with Markle in particular bringing her fashion A-game.

For her big debut as a royal fiancée, the Suits actress opted for a gorgeous ivory tie-front coat from Canadian brand Line the Label (about $626) over a hunter green Parosh Lachi dress (roughly $653), strappy taupe Aquazarra Matilde Crisscross Suede pumps ($695), Le Plaisirs de Burks yellow and gold opal earrings ($995), and of course, her brand new sparkler. She kept her flowing brunette locks loose around her shoulders.

Prince Harry, for his part, looked dapper in a navy blue suit and tie and shiny black loafers.

The bride-to-be’s look was so on point: In fact, it caused a venerable buying frenzy on Line the Label’s site, who have since announced they’re renaming it “The Meghan” in her honor!

As the company’s president and co-founder, John Muscat, said in a statement, “We are incredibly honored that Meghan chose to wear a LINE coat to mark this very special occasion. Meghan has an effortlessly chic sense of style, which we’ve always admired.”

The look wasn’t far off from the white ensemble Kate Middleton wore back in 2010 for her own official engagement photos with Prince William, as shot by Mario Testino.

Prince Harry, 33, and Markle, 36, clasped hands as they posed for pictures and spoke with reporters about their engagement, which they said was “very romantic.”

The couple met in July 2016 and began dating shortly thereafter, with Markle telling Vanity Fair back in October that they are simply “two people who are really happy and in love.”

They’re also two people with impeccable style: We can’t wait to see what she wears for their wedding next spring!

Are you thrilled for Meghan and Prince Harry? Let us know @BritandCo!

Arielle Tschinkel
Arielle Tschinkel is a pop culture junkie who went to NYU because the Olsen twins went to NYU (really). She is a freelance writer whose work has also been featured on HelloGiggles, Refinery29, SheKnows, Bustle, Hollywood.com, and many others; and she's living her dream one Britney Spears GIF at a time. Follow her on Twitter @mrstschinkel or visit her website at arielletschinkel.com.
Celebrities
Celeb Style
Celebrities Celebrity Engagement Engagement Royal Family
More From Celeb Style