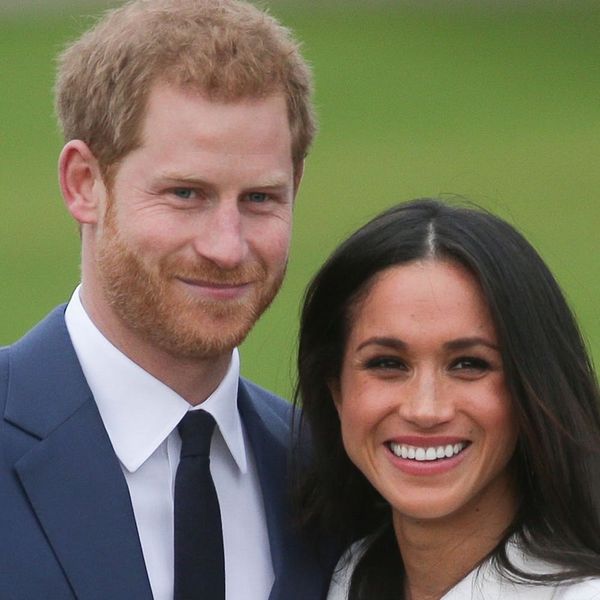 The moment we’ve all been waiting for finally arrived this morning, when the royal family announced that Prince Harry had proposed to his girlfriend of roughly one year, Meghan Markle. The only thing that excited us more than Clarence House’s official announcement was our first glimpse at the showstopping ring the royal chose for his bride-to-be, and with the couple stepping out for their first post-engagement appearance together at a photo call in Sunken Gardens (reportedly one of Princess Diana’s favorite spots), all eyes were on the shiny new sparkler.

Markle, 36, is now sporting an elegant three-stone ring with a yellow-gold band, which Prince Harry reportedly designed himself in advance of his proposal to the Suits actress, just as The Duke of Edinburgh did for Queen Elizabeth back in 1947, using diamonds from a tiara worn by his mother, Princess Alice of Greece.

People reports that the ring was crafted by British jewelers Cleave and Company (the jewelers to Prince Harry’s grandmother, Queen Elizabeth). The center stone is reportedly from Botswana, a country that the couple has visited together, and which holds special memories for Prince Harry, who visited the region as a child.

The adjacent two stones are reportedly from his late mother Princess Diana’s personal collection, following in the tradition of Prince Philip and, in a way, Prince William, who famously gifted the Duchess of Cambridge, Kate Middleton, with a 12-carat sapphire surrounded by 14 diamonds that once belonged to his mother.

What do you think of Meghan’s engagement ring? Tell us @BritandCo!

Arielle Tschinkel
Arielle Tschinkel is a pop culture junkie who went to NYU because the Olsen twins went to NYU (really). She is a freelance writer whose work has also been featured on HelloGiggles, Refinery29, SheKnows, Bustle, Hollywood.com, and many others; and she's living her dream one Britney Spears GIF at a time. Follow her on Twitter @mrstschinkel or visit her website at arielletschinkel.com.
Celebrities
Wedding Style
Celebrities Celebrity Engagement Engagement Engagement Rings Royal Family
More From Wedding Style